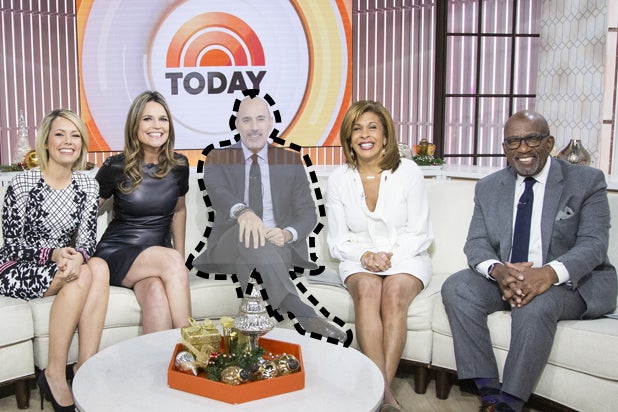 The shocking ouster of Matt Lauer throws the morning news landscape into turmoil, with the once-unassailable “Today” show in disarray at NBC while its competitors scramble in an uncertain and abnormal new world.

The swiftness of Lauer’s disappearance on Wednesday after an illustrious 20-year career in morning television clears a path to a new competitive landscape, though one in which “Today” was already lagging behind “Good Morning America.”

“Matt Lauer represented stability in morning television. He was part of the legacy of great male anchors from Steve Allen to Tom Brokaw to Bryant Gumbel and then Matt,” said Mary Murphy an associate professor at USC’s Annenberg School of Communication and Journalism and and former correspondent for “Entertainment Tonight.”

“His ouster is like amputating a leg or cutting out a heart or lobotomizing a brain. He had it all,” she added. “Ratings will drop, for sure. Audiences are loyal. They have tuned into to see Matt in the morning for at least 20 years. They trusted him — the trust is broken.”

Prior to Wednesday’s news, “Today” was already down double digits year-to-date among total viewers, with a 10 percent decline in overall audience members, according to Nielsen. The drop-off in the key adults 25-54 demo is an even-worse 15 percent. Over on ABC, “Good Morning America” is faring better, but is still down. It’s off 7 percent in overall audience and 12 percent in the demo.

“‘Today’ is a cash cow,” Robert Thompson, director of the Bleier Center for Television & Popular Culture at Syracuse University’s Newhouse School. “A morning show that is doing well in the ratings makes a lot of money… If you think about it, a sitcom is on for a half-hour — the ‘Today’ show covers a lot of time slots.”

A 2015 Pew Research Center estimate found that “Today” was the highest-earning of all the morning shows, besting “GMA” and “CBS This Morning” with an estimated annual revenue in the $400 million range. And, as Thompson points out, that figure doesn’t include the fact that “Today” has proven to be “a really important tool by which you cross-promote other NBCUniversal projects.”

Also Read: How Matt Lauer's Firing Could Impact 'Today' Show in the Ratings

“The ‘Today’ show has been around since 1952, and Matt Lauer was a very important part of its history,” Thompson said. But he added that at the end of the day the format is the real star.

The show’s future success or failure will depend almost completely on who NBC News selects to replace him and what that person’s chemistry with Savannah Guthrie is like, he said.

Jon Nicosia, a managing editor of Mediate and the Independent Journal Review, warned that the future of morning show men may be in doubt.

“With Matt’s firing, I think you guarantee a 100 percent female anchoring of ‘The Today Show’ going forward. There is zero chance a property as valuable at that will take a risk on another male anchor,” he told TheWrap. “You will for sure see men in other roles on the shows, but I think this is the end of any new morning male anchors.”

“I think this is a huge win for ABC,” he added.

“I suspect Today will add a male. That’s the formula they tend to follow,” he told TheWrap. “Everyone in the media world and political world are on guard. Other shoes are gonna drop here.”

“CBS This Morning” is also looking for a new anchor after Charlie Rose was fired last week. While ratings have been off less for CBS than for its network rivals, that could change.

The uncertainty has also left a broad swath of men in the industry unsure of their futures.

“Men in this industry are concerned that there may be a target on their backs and they could be next. My colleagues are literally thinking of past relationships they have had with women and how they ended just to see if there’s some potential problems afoot,” a senior employee of a rival network told TheWrap. “It’s a scary time for most guys who are in the spotlight.”