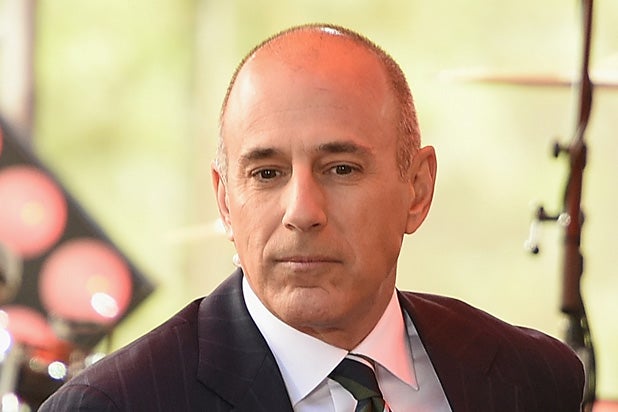 Matt Lauer will not be getting any sort of a severance payout from NBC News, TheWrap has confirmed — regardless of what was left on his lucrative and longterm contract.

The disgraced “Today” show anchor was officially fired “for cause,” per an executive, which means he won’t be compensated beyond his final day of work. Lauer was informed of his ousting on Tuesday evening — the world heard the news the following morning.

The issue of a potential payout came up Friday during a staff meeting for “NBC Nightly News,” an insider told us. When one employee asked NBC News president Noah Oppenheim about the status of Lauer’s deal — which had the anchor making upwards of $20 million per year through 2018 — the group was assured it was now null and void.

Lauer was let go after a colleague accused him of “inappropriate sexual behavior in the workplace.” The original charge can be traced back to his alleged behavior during the 2014’s Sochi Olympics, which were broadcast on NBC.

Since the midweek bombshell, multiple other accusations against Lauer have been unearthed, including a report Wednesday that he once gave a colleague a sex toy as a present. Lauer apologized for his actions yesterday.

“There are no words to express my sorrow and regret for the pain I have caused others by words and actions. To the people I have hurt, I am truly sorry,” he said in a statement read on the NBC morning show Thursday by his former colleague Savannah Guthrie. “As I am writing this, I realize the depth of the damage and disappointment I have left behind at home and at NBC.”

Also Read: What Did NBC Know About Matt Lauer, and When?

As part of the internal post-Lauer cleanup effort, chairman of NBC News and MSNBC Andy Lack sent the following note to his staff today:

Dear Colleagues,
The most vital thing we’ve done since terminating Matt Lauer’s employment on Tuesday night has been spending time listening to your concerns, your feedback, your ideas on how we move forward as an organization.
As I said in my note on Wednesday: our highest priority is to create a workplace environment where everyone feels safe and protected, and to ensure that any actions that run counter to our core values are met with consequences, no matter who the offender.
Many of you have asked what we are doing to learn as much as we can about the circumstances around Matt Lauer’s appalling behavior, why this was able to happen, and why it wasn’t reported sooner.
This week we saw that when an employee comes forward to report misconduct, the system works. The complaint is quickly assessed and meaningful action is taken. But we also learned that we must do a much better job of making people feel empowered to take that crucial first step of reporting bad behavior.
To that end, I have three things to share with you.
A team of the most experienced NBCUniversal Legal and Human Resources leaders have begun a thorough and timely review of what happened and what we can do to build a culture of greater transparency, openness and respect for each other.  At the conclusion of the review we will share what we’ve learned, no matter how painful, and act on it.
Second – while our company has had mandatory online training for all employees on sexual harassment and other workplace issues, we need to do better. Therefore in addition to what is already in place, the News Division is launching an immediate effort to implement in-person training on sexual harassment awareness and appropriate behavior in the workplace. We will share more details on this effort very shortly.
And third– we need to keep communicating. In addition to the meetings we’ve had this week with various show teams and departments, we are encouraging the leaders of every group to have smaller, more informal gatherings to further discuss this crucial issue now and on an ongoing basis.
And, as we have done regularly over the last few months, but cannot do often enough, we want to remind you again that we encourage all employees to speak up and raise any concerns you have about inappropriate conduct you have experienced or observed. We also want to reinforce with our managers and leaders their responsibility to bring forward concerns about inappropriate workplace behavior they see or hear about. It is always the right thing to do, and any concerns raised should be done without fear of retaliation, and with full assurance that they will be investigated.
Here are the multiple avenues available. You can also find these details on the intranet NBCUNow.
If you have something on your mind your manager often is in the best position to resolve your concern quickly. If you are not comfortable talking to your direct manager you can talk to another news leader.
Reach out to your HR Manager or another member of the news HR team.
If you are not comfortable speaking with someone locally about a concern talk to an NBCUniversal Ombudsperson. Call the NBCUniversal Integrity Helpline US 800-622-6221 or International +44 0 20 36186210, send an email to integrity@nbcuni.com or contact an NBCUniversal Ombudsperson from the list on the NBCUniversal Integrity Website at www.nbcunow.com/integrity/speak-up. Concerns can be raised anonymously.
You can call the Comcast Listens Helpline (1-877-40-LISTENS or 1-877-405-4783) or visit the Web Portal (www.ComcastListens.com) to ask a question or raise a concern. The Helpline and Web Portal are both managed by an independent third-party company, which allows you to remain anonymous if you choose.
This has been a very tough week for all of us. Thank you again for your honest feedback. I’ll continue to share information and updates with you in the days and weeks ahead.
Andy