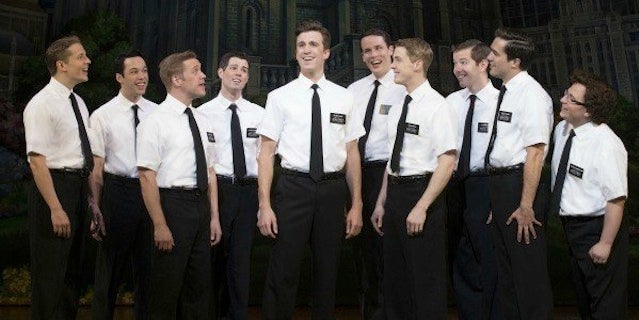 As a self-proclaimed liberal Mormon (aka: oxy-Mormon) I knew I’d be entertained at the  nine-time Tony-winning “Book of Mormon” — but I had no idea how much I’d be inspired, and yes, even proud to call these often eccentric, oddball and devout people my own.

Growing up in a very active Mormon home in Salt Lake City, Utah, I was indoctrinated with all things Latter Day Saints, including an unusual array of Jell-O salads, enough food storage to last a lifetime and the mantra “Every Mormon a Missionary."

How ironic it is that the creators of "South Park" may go down in our history as being the Best. Mormon. Missionaries. Ever. Matt Stone and Trey Parker, along with Robert Lopez, wrote the Broadway smash and 23 songs that go with it … touching on everything from religion, a mission trip to Uganda, genital mutilation, existentialism, "Star Wars" — and well, let’s just say the list is long and unrepentant.

But as I sat in the packed Pantages Theater in Los Angeles, I found myself once again embracing a religion that I had spent my early years defending … and my "latter" days denouncing. You see, there is no such thing as a part-time Mormon. You are either all in … or you find yourself on the outs. And once you become a spectator in the Mormon spectacle, the doctrine doesn’t seem to make as much sense. That’s when many (like me) give Mormon taboos a try (including both caffeinated and alcoholic beverages). Once you are OK swallowing that … it becomes easy to turn your back.

Yet, I couldn’t turn away from the chance to see my Mormon’s portrayed on a Broadway stage. I laughed loudly right alongside a diverse crowd who were curious to connect with my Mormon culture (including my openly gay friend who was my date for the evening).  For decades, Latter Day Saints have been so inaccessible — shrouded in secrecy — while trying to shed the idea that we still have a ‘Big Love’ for polygamy.

Yet, two pop-culture anarchists (neither of whom are members of the LDS faith) somehow managed to make the Mormon’s look fool-hardy … and yet hardly foolish. The production points out the often preposterous pontifications of our Latter Day prophets, while intimating that the "golden plates" are no more far-fetched than burning bushes and parting seas.   The show goes on to insinuate, that for a chosen few, Christ’s teachings can even be found deep within "The Lord of the Rings."

The popularity of this production (which has grossed more than $105 million) has made Mormonism a part of our country’s cultural conversation. (OK, Mitt Romney may have also had something to do with that — but he sang badly and never danced.) And it appears the genius of the creators from "South Park" is rubbing off on the Brethren of Salt Lake. Church leadership apparently approves of the show enough to buy three full-page ads in the Playbill program. Each page is a close-up photo of an attractive young person with a quote such as: "The book is always better."

Who would have thought that two guys who killed Kenny could give so much life to Mormonism? In fact, the Missionary Training Center should consider teaching the song “All-American Prophet” to all the elders who pass through … because never before has complicated religious dogma been lyricized so deftly (and to such a toe-tapping tune).

And speaking of songs, had I heard “Turn It Off” years ago, I could have saved myself hours of therapy.  The insight into how most Mormons are conditioned to not be introspective was emancipating. As a former Miss Salt Lake City, I was a queen when it came to turning off "uncomfortable’ feelings … like a light switch. As the song goes: “Just go click … it’s a cool little Mormon trick."

Yet the greatest trick of all … seems to be how this satire has convinced us Mormon’s to start telling our stories. In fact — as evident from this blog — the musical even turned me back on to my own religion.

Wendy Burch is an acclaimed television anchor, reporter and host. In the course of her broadcast career, she’s interviewed some of the biggest newsmakers of the day. With two decade of reporting experience, she has delivered thousands of live television news reports: everything from breaking news -- to high profile court cases -- to star-studded red-carpet events.

Wendy Burch is an acclaimed television anchor, reporter and host. In the course of her broadcast career, she’s interviewed some of the biggest newsmakers of the day. With two decade of reporting experience, she has delivered thousands of live television news reports: everything from breaking news -- to high profile court cases -- to star-studded red-carpet events.