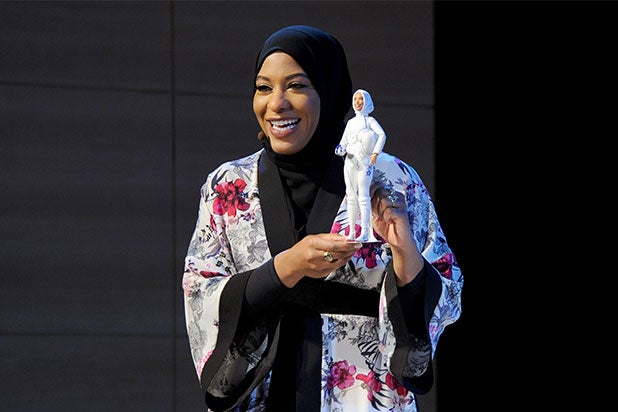 Mattel has unveiled the first-ever hijab-wearing Barbie doll, designed after Olympian Ibtihaj Muhammad, who was the first Olympic athlete to compete wearing a hijab at the 2016 Rio Olympics.

The one-of-a-kind doll made its debut at Glamour’s Women of the Year Live Summit on Monday, as the latest doll in the “Shero” line, an initiative that celebrates women breaking boundaries, according to People.

“I’m excited to just partner with a brand that I know honors powerful women who are breaking barriers and whose sole goal is to impact the future leaders of tomorrow,” Muhammad told People. “To be included in this conversation is very humbling and I’m over the moon about this whole thing.”

The Olympian worked with Mattel to design the doll, according to People. It will be released to the public in the fall of 2019.

“I think its revolutionary for Barbie to take a stand in this moment that we’re in – and I would say, as a country, to have a doll wear a hijab and be the first of its kind,” she said. “There has never been a Barbie doll to wear a hijab before. I’m really excited to have this moment happen in my life and also for all these little girls now who can shop for Barbie doll that may look them, may wear a hijab like they do, or like their mom does, or like a friend does. But also have kids who aren’t Muslim, who don’t wear a hijab, to also have the opportunity to play with a doll that wears a hijab.”

Muhammad is an American sabre fencer and won the bronze medal as part of Team USA, becoming the first female Muslim-American athlete to earn a medal at the Olympics.

She was a featured speaker at TheWrap’s Power Women Breakfast in New York last June. Speaking to TheWrap’s CEO Sharon Waxman, Muhammad said that a hijab is part of her wardrobe — and compared not wearing it to someone going out without pants on. She feels comfortable in the Muslim head covering, but thinks that times are changing because of the current political climate.