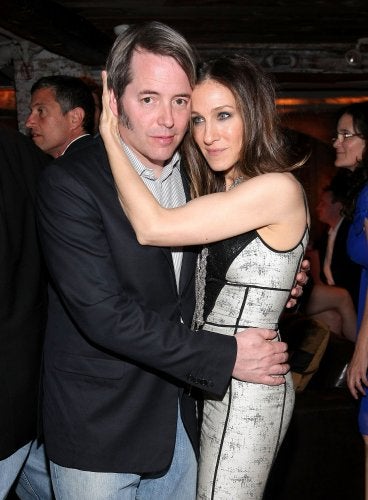 The police chief of a small Ohio town was sent to prison Wednesday for his role in burglarizing the home of a woman who was the surrogate mother to Sarah Jessica Parker and Matthew Broderick’s twin daughters, who were born last June.

Barry Carpenter, 40, received two years and eight months, after a jury convicted him in November of helping to break into Michelle Ross’ Martins Ferry home and removing ultrasound images and personal photographs, while also photographing a plaster belly cast of Ross – items he later tried to sell to a New York paparazzo who traveled to Martins Ferry.

The bizarre story began last May after Ross, whose identity in the surrogacy arrangement had been revealed in the media, temporarily left Belmont County and moved into a West Virginia hotel. While she was there, Carpenter and Chad Dojack, the police chief of a neighboring town, entered her Martins Ferry home.

Soon afterward, the Splash News pap, Justin Steffman, contacted Ross to tell her he’d been approached with the sale of her personal property.

"He was a bit of a bully," Steffman would later testify about Carpenter at the chief’s trial. "I was very nervous. It was the most ridiculous situation I’ve ever been in my life."

Throughout the trial, Carpenter maintained he had entered Ross’ home because a door was open, but denied he’d taken anything. Carpenter said he was only guilty to stupidity for “jokingly” trying to trick Steffman into believing the lawmen were offering the items for sale.

Carpenter had received letters of support from townspeople and fellow cops, which Judge John Solovan acknowledged before sentencing. In fact, four of the town’s 12 officers had shown up during trial to support their chief, much to the annoyance of Mayor Phil Wallace. The case was prosecuted by T. Shawn Hervey from neighboring Harrison County. Dojack will be tried separately in January.

Martins Ferry is about an hour’s drive southwest of Pittsburgh, Pennsylvania, and has a population of just more than 10,000 people. Hervey told The Wrap that although he’s tried previous cases involving theft by public officials, neither he nor Belmont County have seen anything approaching the level of media interest as the Carpenter trial.

“It’s on the Ohio River – a steel town,” is how Hervey described Martins Ferry. “The further away you get from the river and into Ohio, the more farmland you have. Belmont County is known for the Jamboree in the Hills country music festival.”

Hervey says he believes Judge Solovan “took it into consideration that [Carpenter] had a duty to protect people but instead broke the law.” On the other hand, the prosecutor said, the judge may not have thrown the book at Carpenter, who could have received six years, because of the chief’s past good record in law enforcement.

“It’s a sad case,” Hervey said, “because there’s really no satisfaction with the sentencing. You have a victim, Michelle Ross, who had her home invaded and possessions stolen. You have a community that has a black eye and now questions its [police department]. And you have the chief, who before this was an exemplary police officer for 17 years.”

Carpenter was remanded to custody following sentencing, which Hervey characterized as “standard,” rather than remain under house arrest during his appeal. Carpenter’s lawyer, Dennis McNamara, did not return The Wrap’s phone calls for comment.