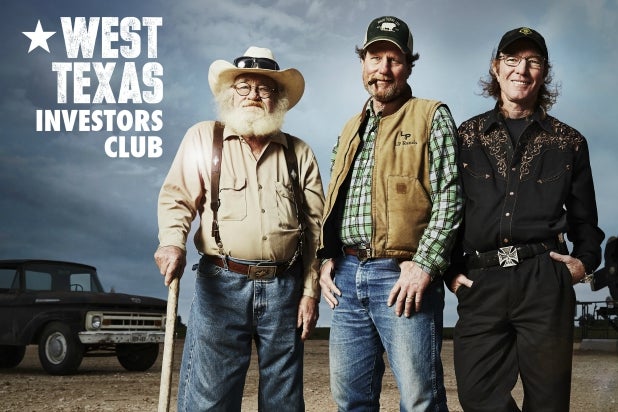 If the “Shark Tank” gang is a little too highfalutin’ for you, perhaps “West Texas Investors Club” may be a bit more your speed.

The CNBC series, set to premiere on Aug. 4, is much like the ABC primetime staple — just don’t expect stars Mike “Rooster” McConaughey and Butch Gilliam to wear suits, use perfect grammar or refrain from pounding beers on camera.

That’s right, Matthew McConaughey has an older brother called Rooster (pictured above, middle), and he’s a self-made millionaire oil tycoon-turned-reality-TV star. He’s also a blue-collar man of the people who kind of looks like and kind of sounds like his Oscar-winning sibling.

“I’ve made more good deals drinking beer than I ever made not drinking beer, I can tell you that,” McConaughey told TheWrap.

On the first season of “West Texas Investors Club,” he and longterm business partner Gilliam (pictured, right) invested $1.97 million in the ideas of aspiring entrepreneurs. (For readers wondering who the third guy in the photo is, that’s McConaughey’s good friend Gil Prather, who is not in the millionaires’ club.)

Gilliam is more conservative with his venture capital, which often leads to the same on-camera exchange. “Well, God dang, Butch — one good deal will bail out four bad ones,” McConaughey will say, to which Butch replies: “Well, why do we have to have four bad ones?”

McConaughey is no stranger to bad deals — and recalled that his worst involves an investment in a corn mill from which he still has not extricated himself.

“It’s a bleeder … it just won’t go away. It’s one of those deals where you’re in it so far that you’re just still chasing your money,” he said. “It could turn out real good, but by God if they gave me most of my money back right now, I’d damn sure take it.”

One day before his interview with TheWrap, McConaughey said he got out of another bad deal — a commercial land deal in San Antonio. “The damn taxes on it were killing me,” he said. “Lots of lessons I’m still learning.”

“I know he’s got a big mouth like me, so he could hurt himself,” McConaughey said. “I kinda like the guy … the country’s in a lot of debt, and if anybody knows how to work around a lot of debt, that guy does.”

“He might be worth $8 billion today and next year be minus a billion,” McConaughey added. “Even if he doesn’t make president — he’s so verbal about stuff that he’ll probably pick up an enemy or two — he’d be a damn good adviser.”

So, Trump/McConaughey 2016? That ticket would have pretty good name recognition, and even better soundbites.

On “West Texas Investors Club,” McConaughey tries to make a few bucks, mentor business newbies and prove that Matthew isn’t the only one in the family enjoying a McConaissance. But don’t expect Rooster to go all Hollywood.

“Hell, some days I wonder why I did it too!” McConaughey said. “But if it’s a big hit and everybody’s having a good time, then I guess I’ll know why.”

That potential big hit is produced by The Ebersol Lanigan Company with Charlie Ebersol, Mike Lanigan and longtime McConaughey friend Jason Henry as executive producers. It was Henry who introduced Ebersol to Rooster, which is when all three became bullish on the creative opportunity.