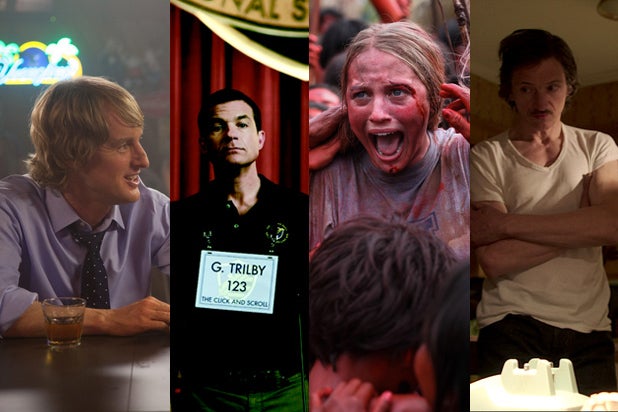 Filmmakers like Alfonso Cuaron and Spike Jonze enter the Toronto Film Festival with a simple question: Will audiences like their movie?

Filmmakers like Matthew Weiner and Eli Roth enter the festival with a follow-up question: Will audiences like it enough for someone to buy it?

Weiner and Roth are among those entering the festival with finished films — but no distributors. All are in the hunt for a deal, but only a select few can feel certain they will get one.

TheWrap spoke with buyers, sellers, agents and other interested parties to find out which films are the most likely ones to get a deal at Toronto.

Also read: Who Will Rule Toronto? 4 Things on the Minds of Movie Buyers at TIFF

Here are the choices repeated by many:

Bateman has already made the jump from a TV actor who lands supporting roles in films to a movie star with a successful producing career to boot. Now he turns his focus to directing. Every buyer and seller listed this as one of the titles with the most comemrcial potential — even rival sales agents.

Knightley stars as an aspiring singer who breaks up with her boyfriend and turns to a producer (Mark Ruffalo) to boost her career. Carney already demonstrated his skill with music-driven films on “Once,” an Irish musical that won an Academy Award for Best Song.

Also read: Who Will Rule Toronto: The Weinstein Company, CAA or Horror Movies?

Egoyan’s film is based on the story of the West Memphis Three, a troika of teenage boys wrongfully imprisoned for murder. Though few expect the movie to ever reach a wide audience, the cast alone is enough to get a deal, and the tale’s resonance in Hollywood gives it a huge leg up in securing a distributor.

Everyone from Johnny Depp to Margaret Cho got involved in the case before the men were released from prison in 2011, and Peter Jackson already produced a documentary.

It’s been seven years since Turturro last directed a film, and that movie, “Romance and Cigarettes,” received mixed reviews. Yet some distributors are bound to be interested given the popularity of Turturro and an impressive cast. Roth first stunned Toronto audiences with “Cabin Fever,” a movie one executive described as the “gold standard” for horror films at the festival. With Roth returning form a lengthy directing hiatus, everyone expects “Green Inferno” will be a highlight of the Midnights section.

Radcliffe returns to the world of the supernatural in this thriller about a man accused of raping and murdering his girlfriend; he uses his newfound paranormal abilities to track down the real killer. Radcliffe proved his marketability on the scarier side of the supernatural with “The Woman in Black” and Aja directed the revolting yet successful  “Piranha 3D” and “The Hills Have Eyes.”

Cage stars as an ex-con who earns a chance at redemption by mentoring a teenage boy (Sheridan). While Gordon Green has not made a commercial film since “Pineapple Express,” teaming with Cage could make this a popular title for companies looking to score big on video on demand.

Though in need of a title change, this project about the final days of Hollywood star Errol Flynn checks several boxes for Hollywood. It is self-referential, depicts the price of stardom and features three prominent actors. Aniston just reminded people of her box office viability with “We’re the Millers” and everyone will want a taste of this Elmore Leonard adaptation after the recent death of the beloved author. Toss in an Oscar winner (Robbins), Oscar nominee (Hawkes) and a couple of sexy castmates (Def and Fisher) and this movie just needs to be decent to get a deal.

Brosnan and Thompson play a divorced couple who plot to recover some stolen money. The last time Hopkins teamed with Thompson and a reputable actor (the more dour Dustin Hoffman in “Last Chance Harvey”), the movie made $32 million — a hefty sum for a Toronto title.

Can you see a movie with these two stars going straight to VOD?

An Oscar-winning director makes a movie about interlocking love stories that stars three of the most attractive people on the planet and Liam Neeson? Yeah, buyers are interested.

Johansson taking on science fiction is enticing enough that any distributor knows it can make some money back if it integrates VOD into the release strategy.

So what if only a few million people watch “Mad Men”? It’s one of the most talked about shows on TV, a critical darling and a shoo-in for the TV pantheon. The mere involvement of its creator (Weiner) will earn this movie an avalanche of press attention and a nice deal.