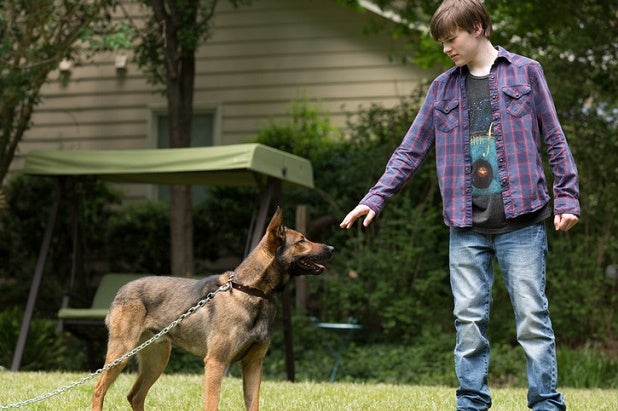 World War I survivor, silent-movie icon, and enthusiastic face-licker Rin Tin Tin was so popular a star that he very nearly won the inaugural Best Actor Oscar in 1929. In these “everything old is new again” times, Warner Bros. resuscitates the spirit of its very first screen legend with “Max,” which updates the myth of the canine superhero to soothe present-day anxieties.

Rin Tin Tin was a four-quadrant celeb, but director Boaz Yakin (“Remember the Titans”) makes no pretense at entertaining adults. When we first see Max the Belgian Malinois (a breed closely related to the German Shepherd) back from his Afghan deployment, clearly suffering from PTSD, the film feints at an allegory about injured veterans. But Max’s military career (and war wounds) are really just a backdrop for a tale that’s preposterous and predictable — if also frequently pleasurable — about a dog that repays the family that gave it a second chance with superhuman devotion and loyalty.

The one genuinely heartbreaking scene in “Max” comes early, when the canine vet drags his handler down the middle of a church toward the altar, a torrent of paws scrambling to get close to the dog’s fallen trainer Kyle (Robbie Amell) for the last time. Now in mourning and terrified of loud noises, the newly aggressive hound is slated to be put down until he’s rescued by Kyle’s family, who are themselves desperate to hold on to something of their deceased older son.

Kyle’s resentful and spoiled younger brother Justin (Josh Wiggins, rightly cast for his perma-smirk) is tasked with rehabilitating Max by his parents (Thomas Haden Church and Lauren Graham) so that the teen doesn’t waste his own summer in front of the computer.

Also Read: From Wags to Riches: 9 of TV's Most Famous Dogs (Photos)

The story beats are as obvious as the dog’s wagging tail. Justin learns how to take responsibility by teaching the anxious, workaholic mutt to be a pet (a little too easily) with the help of Carmen (Mia Xitlali), the tough but flirty new girl in town. Justin and his dad share a meaningful conversation about how, despite Kyle’s sacrifice, the armed forces don’t have a monopoly on heroism. The family eventually trusts Max, caged in the backyard, to let him in the house. Carmen spouts a few facts about Latinos so that the film can pat itself on the back for being multicultural, even while stereotyping almost every other Mexican-American character as a gangster or a drug lord.

None of these plot points are run through with any thoughtfulness or panache. Despite a great, unaffected performance by Wiggins — the only one among the cast — and the primal joy of seeing the dog actors sprinting, leaping and maybe even emoting, the film is sunk because the characters never transcend their seeming origins in a Disney Channel movie project.

Written by Yakin and Sheldon Lettich, the script does offer one real surprise: a subplot about arms trafficking that feels too dark, even for a film like this one in which the protagonist’s older brother is killed (bloodlessly) in the first few minutes.

Justin and Max square off against Kyle’s villainous squad-mate Tyler (Luke Kleintank), who somehow smuggles confiscated firearms from the Taliban and sells them to Mexican cartels in the Texas border region. Tyler’s smooth, snakish tongue and obsessive hatred of Max eventually forces Justin to (ludicrously) choose between the dog’s life or those of his parents, leading to a final confrontation that feels disappointingly small and slapdash.

“Max” takes us to Afghanistan and back, but somehow we end up stuck, as another heroic dog of yesteryear would have it, down Timmy’s well.