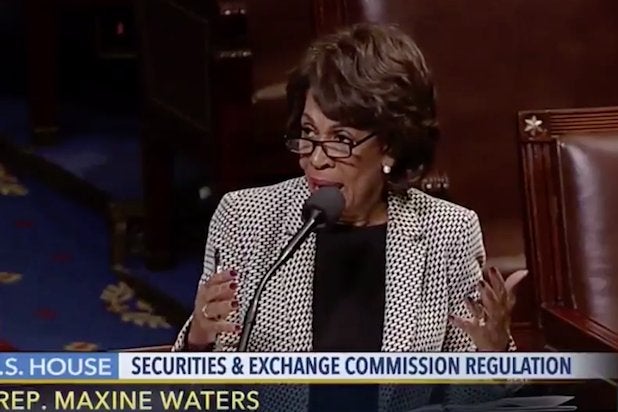 Democratic Rep. Maxine Waters believes that the infamous golden shower claims regarding Donald Trump that were published by BuzzFeed as part of an unverified Russian dossier are true and should lead to the president’s impeachment. She made the declaration during a Thursday appearance on MSNBC.

Trump has repeatedly denied the unverified allegations, referring to the dossier of information as “fake news,” but Waters disagrees.

“I think it should be taken a look at,” Waters said. “I think they should really read it, understand it, analyze it and determine what’s fact and what may not be fact… We already know that the part about the coverage that they have on him with sex actions is supposed to be true. They’ve said it that is absolutely true.”

Rep. Maxine Waters claims on @MSNBC that the sex allegations about Trump in the Russian dossier are true. pic.twitter.com/cd5LNmL0eo

Waters continued: “I think he should go into that dossier and see what’s there… we must get to the facts.”

MSNBC host host Ali Velshi pressed Waters, saying her comment is an allegation unless she has information that the general public isn’t aware of.

“I am saying the investigations must be done,” Waters responded. “I do think that impeachment will be necessary.”

In January, BuzzFeed published a Russian dossier making unverified allegations against Trump, claiming that the Russian government has been “cultivating, supporting and assisting” Trump for years and has information that could be used to blackmail him.

Those allegations included this one:

“According to Source D, where s/he had been present, TRUMP’s (perverted) conduct in Moscow included hiring the presidential suite of the Ritz Carlton Hotel, where he knew President and Mrs OBAMA (whom he hated) had stayed on one of their official trips to Russia, and defiling the bed where they had slept by employing a number of prostitutes to perform a ‘golden showers’ (urination) in front of him.”

Trump indirectly addressed the “golden showers” claim, saying, “Does anyone really believe that story? ‘I’m also very much of a germaphobe, by the way. Believe me.”

Waters it an outspoken critic of President Trump: the California lawmaker previously called POTUS “not normal” when explaining why she skipped out on his recent address to Congress. “He does not deserve to be honored,” she told MSNBC at the time.