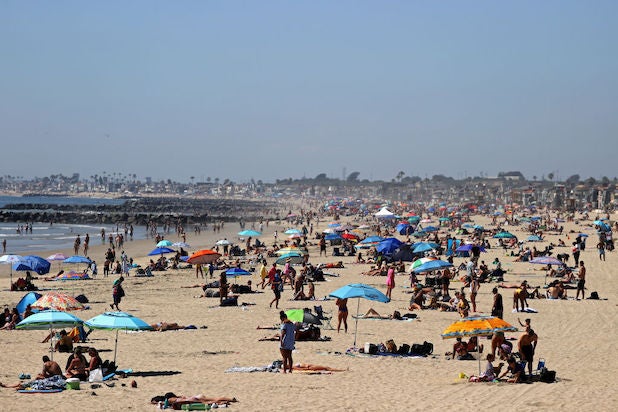 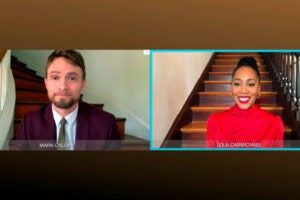 How much more do we know now over what we knew in April?

It’s May already, which I mention only because being in quarantine has made it hard to keep track of time. A lot of us are barely able to distinguish between Monday and Tuesday much less March and April. I’ve been waiting for May because it means that I got through April, and that maybe means an end to this endless-seeming quarantine.

Lowering the bar here: an end to this phase of the quarantine.

But May is here and instead of seeing an end to infection and loosening of lockdown and a pause in unemployment, things are blurry. How much more do we know now over what we knew a month ago?

The information we’re getting is muddy. It’s vague — deliberately so, it seems. I’m not talking about the White House, which confidently declared victory over the coronavirus crisis last week as deaths rocketed past the 60,000 mark. Even the governors who are using science and a semblance of common sense are vague about the next steps. The curve in California has been flattened for weeks but that is no longer enough, apparently. We need testing and contact tracing. And while that was promised several weeks ago, that is also not in place. And no date has been given for when that will be in place.

Also Read: Lesley Stahl Reveals on '60 Minutes' That She Had Coronavirus (Video)

In New York, there’s more clarity but it still ain’t crystal. Between the feuding between Governor Andrew Cuomo and the White House and the feuding between Cuomo and New York City Mayor Bill de Blasio, it’s hard to know what to think. The curve has been flattening but the hard lockdown remains for the foreseeable future. And with the number of infections declining it’s still terrifying to see people out in force this weekend in parks, without masks.

Because the back of my brain wonders: A few parks? A single rogue neighborhood? Are New Yorkers really out in force without masks?

A clear picture may be difficult to obtain because every piece of information is colored by a generalized disgust and distrust of anything that comes out of the White House. The administration’s overall message that “everything is fine” is so clearly wrong that the media seems to be assuming the polar opposite is true. Trump and his sycophants have so badly bungled their response to this pandemic that, justifiably, credible people don’t trust what they have to say — even when it may be correct.

Here is a graph of COVID-19 cases by California counties from the L.A. Times. I swear I can’t tell if Los Angeles, with its upward curve, is doing well, or terrible? Better or worse? 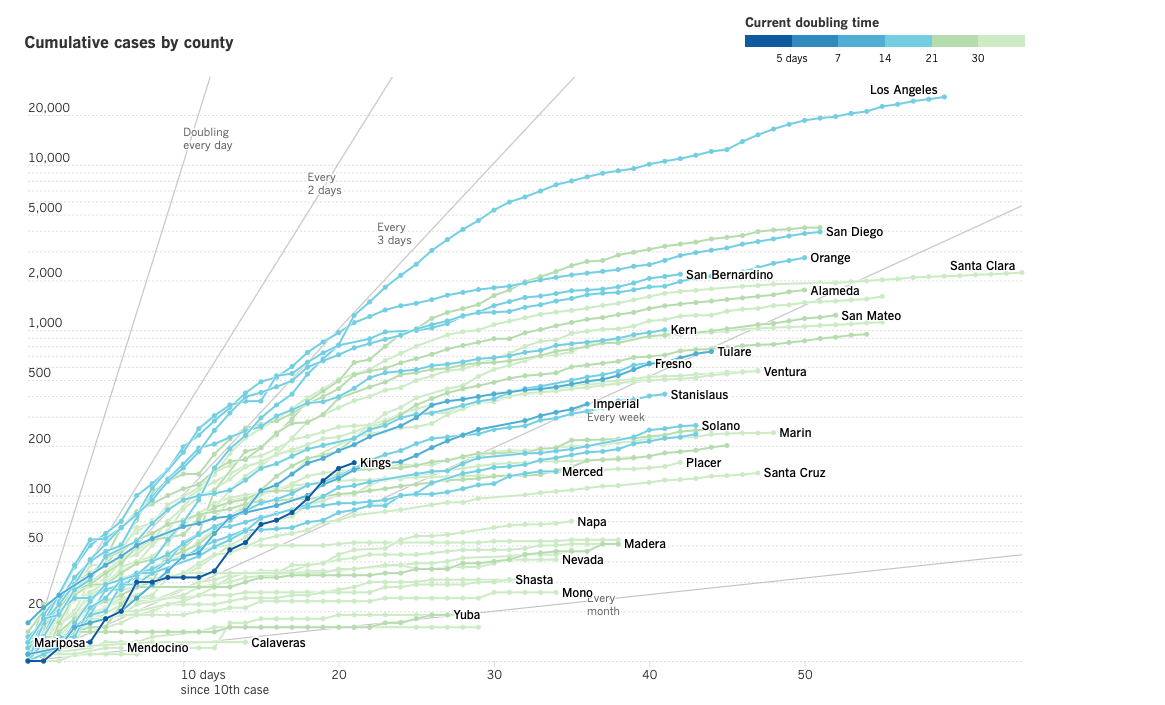 Similarly, the United States appears to be doing poorly compared to other Western democracies in containing death and infection. But this graph from the Financial Times shows the United States bending its curve. Is it being bent enough to be like, say, the United Kingdom? To be like Germany? 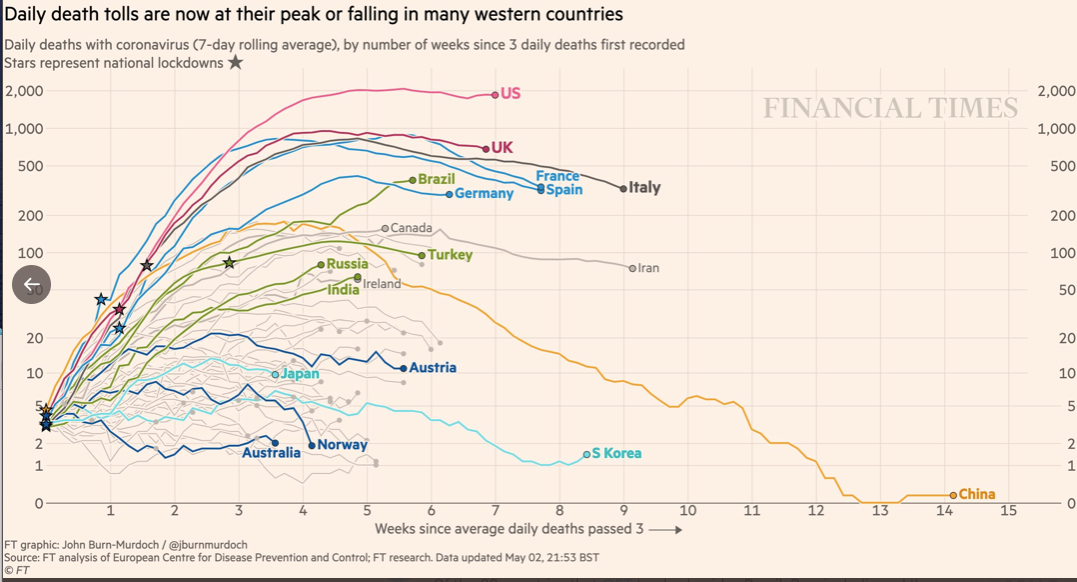 Media critic Steve Krakauer pointed out on Sunday that deaths have declined in the United States for five days in a row. He also points out that the media has not noted this fact over the weekend. 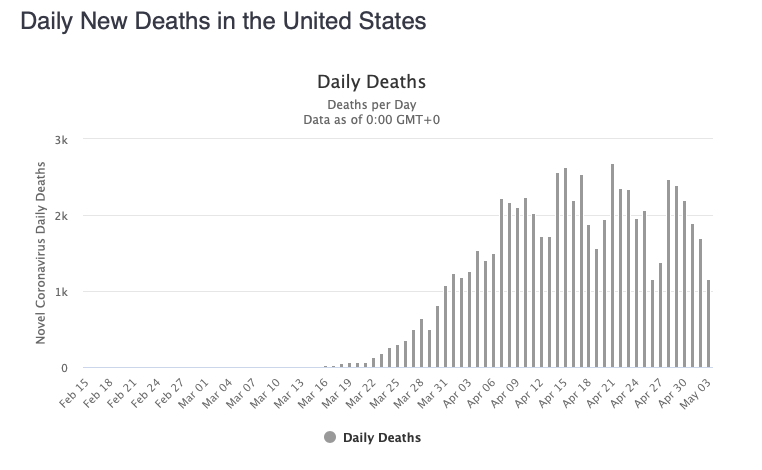 Politics is getting into everything. The Trump White House has suggested that fiscal aid packages ought not benefit states led by Democrats, and encouraged anti-lockdown protesters (many armed to the teeth) in states with Democratic governors. Which makes it feel like he considers California the enemy and not the virus.

Also Read: Coronavirus Deaths Tops 50,000 in US, More Than Any Other Country

As I’ve mentioned before, we’ve been under quarantine the longest in California — entering our eighth week — with among the lowest deaths per capita in the country. And yet still we have among the tightest lockdowns in the country. It makes me wonder if solutions are beyond our grasp, or at least beyond the grasp of the general public.

Only under crushing political pressure with everyone from Elon Musk to aggressive protesters in Orange County demanding that the state reopen, did Governor Gavin Newsom back down on Friday. He promised that a loosening of the lockdown would be coming in “days not weeks.”

But he still sounds like he’s trying to buy time, providing platitudes rather than hard information.

I don’t know why that would be in the Age of Information. But in this war against a pandemic, with millions suffering and so many of us wondering what the future looks like, information has become — like in all wars — the first casualty. 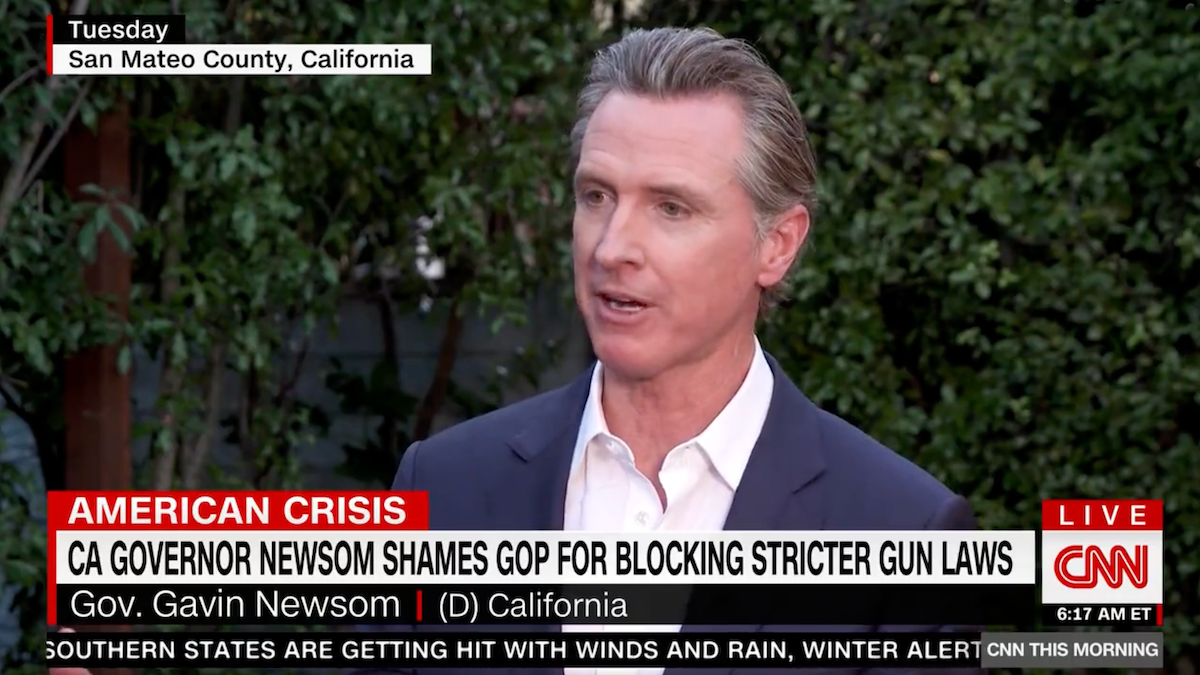 Gavin Newsom Blasts Fed Government After 2 California Mass Shootings in 3 Days: ‘This Is on Everybody. We’ve Chosen This’ (Video)