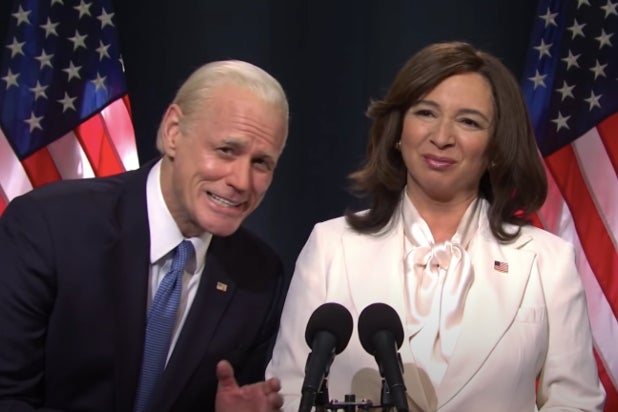 The white pantsuit Maya Rudolph wore as Kamala Harris on this week’s episode of “Saturday Night Live” was originally bought last year to be worn by Cecily Strong in a Melania Trump sketch.

Though that particular Melania impression never came to fruition, the ironic detail was revealed in a recent Popsugar interview with “SNL” costume designer Tom Broecker and wardrobe supervisor Dale Richards. According to the outlet, the costume department was able to repurpose the unused pantsuit to recreate the ensemble that Harris wore during her and Joe Biden’s first speech after they were projected as the winners of the 2020 Presidential Election on Saturday.

Broecker and Richards only had 85 minutes to re-create Harris’ beautiful cream-white pantsuit, which she wore on stage in Wilmington, Delaware to address the nation alongside Biden at about 8:30 p.m. ET on Saturday. Since “SNL” goes live at 11:30 p.m. ET, they had to act fast using only what the costume department already had on hand, since every clothing store in New York City was closed for the day.

“I had a member of my team working on each piece: the blouse, the jacket, and the pants,” Richards told Popsugar.

But although they couldn’t go out and buy the same Carolina Herrera suit that Harris wore, they got pretty damn close for this week’s cold open, which you can watch here.

“My assistant started capturing screen grabs of everything [Harris] was wearing so we could get all the details right — the shoes, the jewelry, the hair, makeup, blouse, and the suit. By 9 p.m. we had pulled all the ‘research’ photos together and started looking through our stock to see if there was anything that could work,” Broecker said.

So, they used “a box of cream charmeuse fabric” to recreate Harris’s silk blouse, and completely recut and altered the pantsuit Strong almost wore as Melania to fit Rudolph as Harris.

“They put the jacket on Maya’s mannequin form in the office and went to work, just like in the movie Cinderella. Eighty minutes later, and four tailors exhausted, Maya did a fitting. It was perfect and she was ready to go to the stage,” Broecker added. “As she was leaving her dressing room, I realized she didn’t have her flag pin on her lapel. Her dresser went running into the wardrobe room to get her flag pin. I will say this: nowhere else in the world could this happen.”