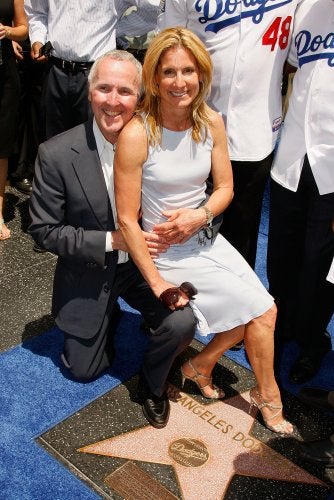 Lawyers for Frank and Jamie McCourt are scheduled to meet in court to launch the opening salvos in what promises to be the Dodgers’ most popular post-season spectacle since the 1988 World Series.

In mid October, team owner Frank McCourt announced the pair was separating after 30 years of marriage due to irreconcilable differences. Represented by uber-lawyer Bert Fields, Jamie McCourt, who was paid $2 million a year as the team’s CEO, filed for the split two weeks later; she is seeking her job back (the subject of today’s hearing), half-ownership of the team plus $321,000 per month in alimony – if the Dodgers don’t take, her back she’ll accept $488,000 per month.

Frank’s side accused Jamie of conducting a love affair on the company dime with her driver, Jeff Fuller. But first, he’s asking the Superior Court to settle the issue of who owns the club, then proceed with the divorce itself.

The property involved in the increasingly ugly fight rounds off to more than $1 billion.

At the moment the betting money says the franchise’s ownership will not survive the divorce and that the team will eventually have to be sold. Besides the livelihoods of the McCourts, at stake is the fate of one of baseball’s most hallowed teams and the future of commercial development at its Chavez Ravine stadium. For now the Dodgers’ half-billion dollar plan to make the ballpark a year-round attraction by adding retail stores, restaurants, a museum and green belts are on hold. The project’s timetable called for the work to be completed in time for the team’s 50th Los Angeles anniversary, in 2012.

The hearing will be sketched but not photographed or televised, thanks to a decision by court commissioner Scott Gordon, who is also banning reporters’ use of laptops, cell phones, Blackberries, etc. (At least the media can bring these into the courtroom – during the federal Anthony Pellicano trials reporters’ mobiles were confiscated every time their owners entered Judge Dale Fischer’s court.)

Also, according to the court’s media advisory: No ins and outs, as though Room 88 is an elite night club. Call it Club Hell.