(Warning: Some spoilers ahead for episode six on WandaVision)

With just three “WandaVision” episodes remaining, fans are scrambling to figure out just who the series’ main villain actually is — the most popular guesses ranging from Agatha Harkness to Mephisto to Nightmare to Wanda herself.

But while we’re trying to establish our foe, there’s also a mysterious friend lurking around. And a lot of people are convinced that friend is Reed Richards.

It was established back in episode 5 that “the Hex” phenomenon affecting Westview is emitting a ton of cosmic microwave background radiation, which for the record is no joke. Prolonged exposure can cause horrific medical problems or even kill living beings, which is why it wasn’t safe for Monica Rambeau to return after being kicked out of Westview by Wanda at the end of episode 3 (and 4).

But. “I know an aerospace engineer who’d be up for this challenge,” Monica says before pulling out her cell phone, ostensibly to text them.

In episode six, we learn that Monica’s engineer friend is in fact a guy, and is ready to meet up “over the ridge” to get her what she needs. And in the final moments of the episode, Jimmy Woo and Monica are rushing to meet that mystery man as the Hex expands in every direction, absorbing several S.W.O.R.D. agents — and Darcy Lewis — into Wanda’s sitcom reality.

Does this mean that episode 7 – which credible rumors and basic math suggests will be the first of three hour-long episodes bringing the season to a close — is about to introduce the leader of the MCU’s Fantastic Four?

It’s not the craziest theory to come out of the show. When you think “aerospace engineer” in the Marvel Universe, your mind immediately goes to Reed Richards. Where Bruce Banner has the most experience with Gamma Radiation, Reed Richards tends to be the reigning authority on cosmic entities.

According to Monica, all she needs is “a 10,000-pound fallout shelter, comprised of lead for photons, cadmium for neutrons, tantalum for seismic blasts…on wheels.” Then, yes, she can theoretically re-enter Westview safely.

Perhaps it’s stating the obvious, but a 10,000-pound shelter is… a lot. For anyone. On the contrary, a suit designed specifically for the trip? Much easier. And who do we know that can create a super suit specifically designed to adapt to certain energies flowing around and through it? One Reed Richards. Plus, a suit is far easier to pick up at that meeting point over the ridge than a massive bunker that they would, what, hitch to the back of their stolen SWORD vehicle? 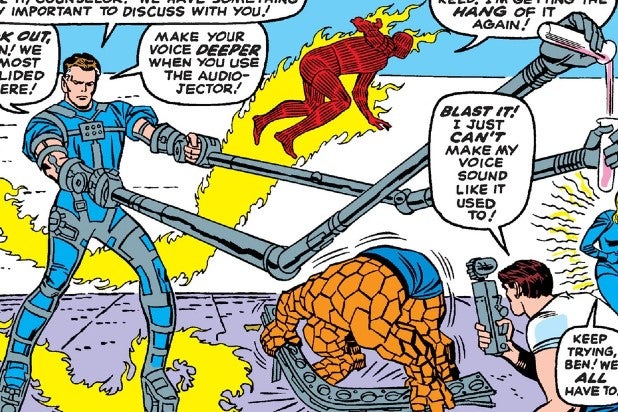 But, while the story aspect would make sense, would actual real world (and MCU) logistics allow for it to happen this week?

First, this is assuming that, in WandaVision’s timeline, the Fantastic Four already had their origin story and Reed has been forced to design suits that can handle their unique powers. That, in and of itself, would create a massive glitch for an already messy MCU timeline. (Remember, “WandaVision takes place about 3 weeks after “Avengers: Endgame.”)

Having their origin story happen off-screen would be fine — that’s how the MCU handled Spider-Man — had there been a single mention of them up to this point. Obviously, that wasn’t possible, considering the Disney/Fox merger.

Also, it’s been just two months since Marvel announced that the Fantastic Four would be joining the MCU with their own film. No release date was given, no cast was announced – all we know is that it’s happening and Jon Watts is attached to direct.

Now, it’s entirely possible that a Reed Richards had already been chosen, and was somehow miraculously kept a secret for the sake of shock factor in “WandaVision.”

But it’s imperative to remember, “WandaVision” had long since finished filming by the December 10th announcement of the Fantastic Four. The series first started filming in the Fall of 2019. In March, “WandaVision” was among the many Hollywood productions forced to shut down due to COVID-19. Filming resumed in September 2020 and finished in November.

This would mean that Marvel would have had to have their Reed Richards chosen, his NDAs signed, and avoided a single leak of him being on set for months, while the Fantastic Four movie itself is still a few years out. It’s Marvel, so it’s possible. But it doesn’t feel all that likely. Should Monica’s friend actually be Reed, it’ll probably be just a name-drop, at best.

That might even be for the best. With the impending arrival of a new Big Bad in the MCU, plus the arrival of Evan Peters potentially opening up the multiverse to the X-Men, bringing in the Fantastic Four might just be too much noise right now. Marvel has the luxury of time at this point; the build-up to Marvel’s First Family can (and should) be allowed to breathe.

Then again, with Darcy now officially trapped in the Hex, Monica and Jimmy could use some extra help. Maybe WandaVision will make it happen. You never really know what to expect in Westview.