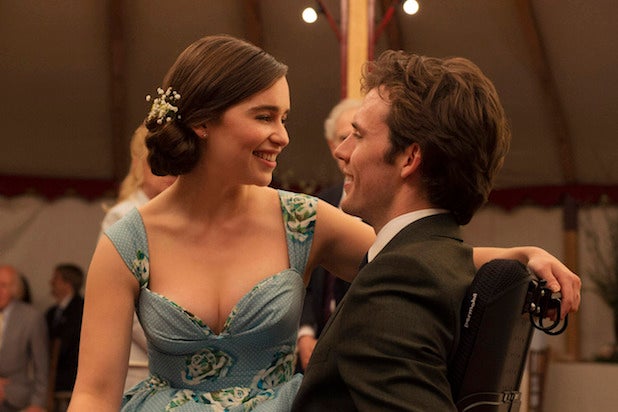 There has been an assumptive refrain in recent years that moviegoers don’t want to see love stories anymore, and that expensive nights out at the multiplex are reserved exclusively for the explosions and action that big-studio event films provide.

But with the success of New Line and MGM’s new satisfyingly sad relationship drama “Me Before You,” the theory that romantic movies are outdated appears to be wrong.

Starring Emilia Clarke (“Game of Thrones”) and Sam Claflin (“The Hunger Games”), the film is based on Jojo Moyes’ popular book of the same name. It opened this weekend to an impressive $18.7 million from 2,704 theaters — well above initial projections of $14 million.

So why did it beat expectations?

Part of the success of “Me Before You” has to do with its target audience being women, who are arguably underserved at multiplexes, especially at this time of year.

“Any time a decent film comes out during the summer blockbuster season, one that is specifically aimed at females, it will likely over-perform — especially since just about everything else in theaters is aimed squarely at 13-year-old boys, or those that act like them,” Jeff Bock, senior analyst at Exhibitor Relations, said.

Warner Bros. EVP of domestic film distribution Jeff Goldstein agrees that female moviegoers don’t have a whole lot to choose from. “My wife and daughter would say the industry is woefully short when it comes to making the movies women want to see,” he told TheWrap. “There’s a big hole to fill with films like this.”

Also Read: 'Me Before You' Review: Emilia Clarke Love Story Has a Terminal Case of the Cutesies

Seeing that “Me Before You” represents a bastion for audiences craving an alternative to action-driven, CGI-filled tentpole movies, it’s worth pointing out that the film also lacks competition. With no widely-released romantic drama in sight for the remainder of the summer, “Me Before You” has a long platform to keep collecting box office returns in the weeks to come.

“Me Before You” is about a woman who becomes close with a paralyzed man. And without spoiling it, the film ultimately delivers on its weepy appeal — similar to 2014’s wildly popular “The Fault in Our Stars,” also a book adaptation that had audiences going through their Kleenex boxes. “TFIOS” went on to make an astounding $307.2 million worldwide against its modest $12 million budget.

Also Read: Now That the 'Game of Thrones' Penis Has Been Freed, What Does It Mean?

In terms of box office potential, however, Goldstein said “Me Before You” is more in line with 2014’s “If I Stay” — a themed-book adaptation starring Chloe Grace Moretz, which was budgeted comparably to “TFIOS” at $11 million, but ultimately made $78.9 million worldwide.

Although “You” got off to a stronger start last weekend, bringing in a few million more than “Stay’s” $15.7 million opening, the budget for the Clarke-Claflin love story was about double that of the Moretz film, as it was made for just over $20 million (not counting marketing).

Romance films are far from a sure bet, however. Dramatic love stories and romantic comedies alike get a bad rap because they are hard to make well, argued Bock. “There are so many bad films in those genres, you forget that when done well, they can really shake up the box office.”

“Me Before You” also did well in spite of tepid reviews, earning a Rotten Tomatoes score of 56 percent. Still, audiences were excited to see it, given its A CinemaScore. “With many hard-core genre films, they really are somewhat bulletproof in terms of critical response as long as they’re not completely lambasted,” Bock said. “As an ticket buyer, you either want to see that kind of film or you don’t, regardless of reviewer’s opinions.”

So, will theatergoers hungry for more romance be seeing more pure-play love stories on the big screen in the future? No, said Goldstein. “It’s all cyclical. The [ticket] prices have to come around.”