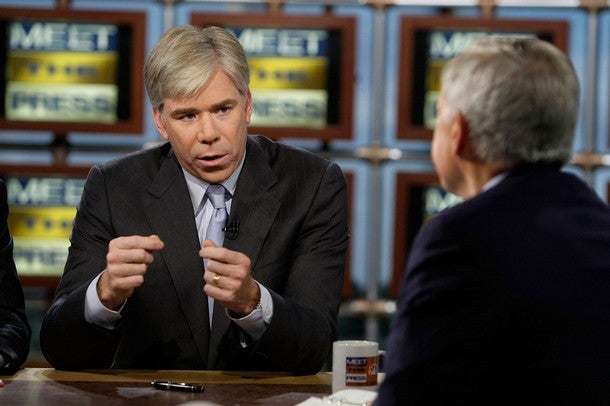 An interesting, Inside-the-Beltway media debate over fact-checking guests on Sunday morning talk-shows has boiled over, with Jake Tapper instituting such a policy at “This Week” while he keeps Christiane Amanpour’s seat warm, David Gregory proclaiming “Meet The Press” doesn’t need formal fact-checking and NYU professor Jay Rosen – who introduced the concept – sniping at Gregory for not trying it out.

In January, Gregory told Politico that Rosen’s idea – of fact-checking “Meet The Press” guests and posting results online – was a good one and that he and his staff were “going to talk about it.”

Earlier this month, ABC News announced a collaboration with Politifact.com to fact-check guests on Tapper’s “This Week.”

Gregory responded (via Howard Kurtz): "People can fact-check ‘Meet the Press’ every week on their own terms.”

Look, I don’t think it’s fair to suggest I’m opposed to fact checking or accountability or real journalism for that matter.

My view is that I just don’t think we need a formal arrangement to accomplish that goal.

Rosen, for his part, said Monday that Gregory has “painted himself into a strange corner”:

I see two other possibilities for his refusal to adopt the fact check: one banal, the other more troubling. The banal: He’s too proud to adopt something that a competitor picked up on first; it would look like a "me too" response and he is the market leader, first in the ratings and heir to the chair that Tim Russert held.  The more disturbing possibility is that he thinks Tapper’s policy may give Meet the Press a competitive edge in booking guests who won’t want to be checked so vigorously. (As opposed to competing with an even better fact check, which would probably cause Bob Schieffer at Face the Nation to adopt the same policy, forcing the guests to accept the new rules or flee to cable, which has a fraction of the viewers.)

My take: It’s hard to understand why Gregory would be averse to trying something that could give the show more credibility. I doubt it’s the “follow-the-leader” possibility Rosen suggests – in the grand scheme of things, it’s an inside baseball innovation, and I doubt we’ll see ABC touting “This Week” as “The Only Sunday Morning Talk Show That Fact-Checks its Guests!”

I suppose the other possibility – that not fact-checking guests will give “Meet The Press” a booking edge – is plausible, if troubling. Though I would assume political guests are drawn to ratings, not media-on-media minutia.