The drama surrounding a 6-year-old Colorado boy — who was thought to have been swept up in a homemade balloon that made a high-altitude trip across the state — had the media in its grip.

Live video of the balloon was splashed across cable news — interrupting lunches in New York – in a scene reminiscent of Baby Jessica but watched with O.J. chase fervor.

And like most live news events these days, it tore up Twitter before the balloon landed at about 3:40 p.m. EDT — without the boy, whose name is Falcon Heene, inside. (The boy’s parents, Richard and Mayumi — something of amateur storm chasers — had appeared on the ABC reality series “Wife Swap.”) 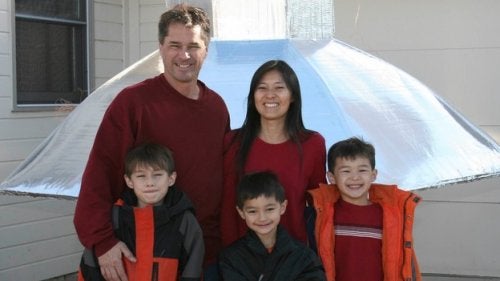 The balloon boy story occupied eight of the top 10 topics on Twitter this afternoon:

The FAA used the media to ask for ideas about how they might bring the balloon down. (As Time magazine’s James Poniewozik noted on Twitter, it would’ve been be the greatest crowd-sourced solution in history.)

@brianstelter KUSA-TV reported at 2p ET that the balloon boy’s father called the station "in a panic" and asked if their chopper could help track balloon.

@slate Sheriff’s dept tells CNN they’re focusing their search for #balloonboy on his family’s neighborhood; might not have been in it to begin with

@sepinwall Right on cue, with no info at hand about the fate of the boy and time to fill, MSNBC anchors starting to question the parents’ bonafides.

@HitFixDaniel CNN is treating "Wife Swap" as if it’s an exotic and unheard-of series, not a show that’s been on ABC for nigh on 100 episodes.

@poniewozik Shep on FNC: "If nothing else, we’ve had a fascinating hour and a half with no commercials, watching a beautiful day in Colorado."

@perezhilton There’s nobody inside the balloon!!!! So sad. Where is he???? Hopefully not…. well. You know. Let’s hold out hope! #SaveBalloonBoy

Before he was found alive after hiding in the family’s attic, some cable news hosts struggled to strike the right tone. "Short of Superman," Wolf Blitzer asked the pilot, "What could have been done to save that little boy?"

When Falcon was finally discovered alive at 6:10 p.m EDT, the result was a secondary Twitter surge.

@marklisanti The exhaling sound you hear is four hours’ worth of swallowed jokes suddenly rushing out of the internet.

@HitFixDaniel America hasn’t has this kind of simultaneous desire to hug and throttle a small child since the "Webster" years.

@Megan Coming Christmas 2012: Pax Jolie-Pitt stars in "Falcon Flight" — a story about a boy with a dream to one day control the media.

@franklinavenue Today’s coverage of "Balloon Boy" brought to you by Disney Home Entertainment. "Up" released on DVD and Blu-ray on Nov. 10!

@r How long will it take South Park to do a #balloonboy episode?

The Heene family had appeared on "Wife Swap" twice, including the 100th episode, which aired last March.

According to ABC’s site, the family devotes its time to "scientific experiments that include looking for extraterrestrials and building a research-gathering flying saucer to send into the eye of the storm. In this ultimate swap, the Heenes swap lives with a psychic mom who speaks to the dead and can control the weather, her husband and her children — who believe they are destined to be stars.”

The show featured "aliens, punk rockers, past-life regression and, for the first time ever, the children from the two families will face off in a kids’ table meeting. Heene/Silver, the 100th episode of Wife Swap, destined to become a classic!”

On Thursday, America’s Balloon-Boy Swap was an instant classic.