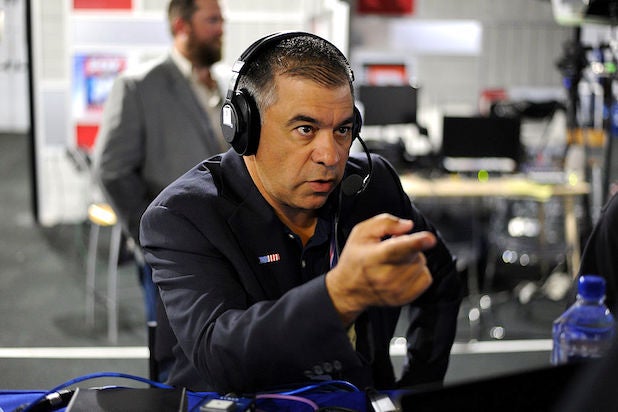 When Donald Trump announced that veteran conservative operative David Bossie would be his deputy campaign manager, he called him “a friend of mine for many years” who “loves politics, knows how to win.”

Those comments to the Washington Post may be true. But Bossie has also been accused — by a former Republican president, no less — of propagating “the kind of sleaze that diminishes the political process.”

Bossie did not respond to our requests for comment. But here are seven things to know about Trump’s latest hire:

1. He operated a phone sex line. No, really.
Washington Post columnist Ruth Marcus reports that in 1992, Bossie “worked on an anti-Clinton effort that included a phone line in which callers could pay $4.99 to hear supposed sex tapes between Bill Clinton and Gennifer Flowers.” According to a 1999 article by PoliticalResearch.org, a non-profit research group, the incident was so “distasteful” the Bush/Quayle campaign was forced to condemn it. The president called it “the kind of sleaze that diminishes the political process” right before filing a Federal Election Commission complaint.

2. He once harassed the mother of a woman who committed suicide.
A 1992 CBS News investigative piece called “Dirty Tricks” said Bossie harassed of friends and family of a woman by the name of Susan Coleman. Coleman had committed suicide 15 years earlier while seven months pregnant. Bossie was investigating whether Coleman shot herself after having an affair with her law professor, Bill Clinton, and getting pregnant.

“The family and friends of Susan Coleman have been forced to relive this tragedy as political agents threaten to drag her name through the mud,” the CBS piece said, calling it an “unusually brazen dirty tricks operation run by an independent committee that supports George Bush for president.”

CBS said Bossie and another investigator followed Coleman’s mother to an Army hospital where her husband was being treated for a stroke. “Here the two men burst into the sick man’s room, and began questioning the shaken mother about her daughter’s suicide,” the CBS report went on to say.

3. He was once compared to Roy Cohn
Five years later, Bossie worked as a committee investigator for former Republican Rep. Dan Burton, who was so convinced the Clintons had murdered Deputy White House Council Vince Foster (According to five official or governmental investigations he committed suicide) that he reportedly re-enacted the alleged crime in his backyard shooting a watermelon with his own pistol.

Bossie, who investigated Clinton’s campaign fundraising, left such a bad impression on the committee’s chief counsel and two other staffers, they wrote a letter denouncing Bossie’s tactics.

“Not since Roy Cohn — the bare-knuckled chief counsel for Sen. Joe McCarthy in the Red-hunting hearings of the 1950s — has a congressional staffer been so thoroughly demonized by his enemies,” the letter read. Incidentally, Cohn became Trump’s lawyer in 1977.

4. He was reprimanded by Newt Gingrich for doctoring evidence
Bossie was forced to resign a year from the committee after being accused of doctoring tapes of former Hillary Clinton law partner Webster Hubbell. The tapes were edited to exclude exculpatory comments about whether Clinton had known of Hubbell’s phony billing, according to the Post.

Then-House Speaker Newt Gingrich told Burton he was “embarrassed” at the “circus that went on at your committee,” the Post reported.

6. He gave us Citizens United
Bossie was president of Citizens United, the advocacy non-profit whose lawsuit led to the U.S. Supreme Court decision that essentially allows unlimited contribution to political candidates by unions and corporations. The court voted in favor of the conservative group when it sued for the right to broadcast ads for Bossie’s anti-Clinton documentary, “Hillary: The Movie,” during the 2008 election.

7. Bossie marks Trump’s third Mercer hire
As the Post notes, Bossie is a friend of both Trump Campaign CEO Steve Bannon and Trump’s campaign manager Kellyanne Conway. He is also close to the Mercer family, who according to the Post, funded his organizations and has been a major backer of Trump’s campaign. Mercer, the co-CEO of hedge fund Renaissance Technologies and a major contributor to conservative political causes, is also the financier of Breitbart, which Bannon used to run. Which begs the question: Who exactly is running Trump’s campaign?

We asked the Trump campaign to explain, but so far we haven’t heard back.