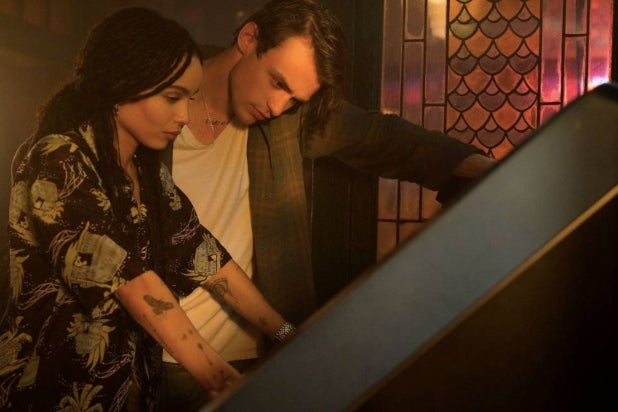 Thomas Doherty isn’t actually a rock star in real life, but he could have fooled us.

In real life, the actor is actually dating actress and singer Dove Cameron, with whom he starred in Disney Channel’s “Descendants 2.”

Also Read: Hulu in March: Here's Everything Coming and Going

He’s also known for playing the role of Peter Zavadovsky opposite Helen Mirren on HBO’s “Catherine the Great.”

“My first ever sexual scene was with Dame Helen Mirren,” he said.  “Peter was one of her younger lovers,” he said. When pressed for more information, he told TheWrap: “I basically got on my hands and knees and lifted Helen’s dress.”

Unfortunately for fans of “High Fidelity,” we must report that despite his convincing depiction of an up-and-coming musician on the show, Doherty does not plan on dropping a mixtape of his own any time soon. But he did learn how to play the guitar for the role.

“I went into the audition, and the final question was, ‘Do you by chance play the guitar?'” he told TheWrap. “When you’re a musician, you just say yes to everything,” he said, even though it was a bit of a fib. “So I learned how to play the guitar.”

As far as his own taste in music goes, he’s into everything from Kendrick Lamar to Louis Prima, he says — and, of course, legendary producer and Lena Dunham’s ex Jack Antonoff, with whom he shares a scene in the Hulu series.

Doherty admits that when he first went in to perform the scene in which they record a song at New York’s Electric Lady Studios, he didn’t realize who he was acting with.

“I obviously knew who [Antonoff] was, but I didn’t recognize who he was,” he said. “We were filming at Electric Lady… I think Jack works there, so we went into another studio and he was listening to his own music and working on two things at the same time. I got to hear some of his new stuff,” he gushed.

Doherty says he’s also a big fan of Antonoff’s former band, Fun. “I think I seemed like a fangirl when I eventually did come around to saying it,” he said. “I kind of grew up listening to that.”

Although he does enjoy listening to the “sweet dulcet tones” of vinyl records, he and Cameron don’t currently own a working record-player of their own — another way in which Doherty’s real-life diverges from the music-drenched Hulu series.

For example, he doesn’t think it’s a good idea to reach out to your exes to find out what went wrong.

“I don’t think it’s wise to dig up the past. You can reflect on it, but maybe not go and see them all,” he joked. “I wouldn’t go on a kind of ego-crusade.”

However, Doherty did confirm that he was a fan of both the Cusack film and the Nick Hornby novel long before he got the part on the Hulu series — and that he does share some commonalities with his musician alter ego.

“When I heard that they were remaking it, I was a bit like, ‘Oh shit,’ kind of like, ‘don’t touch it,’ almost. But then I heard that Zoë [Kravitz] was involved… so I was like, ‘F— yeah, I’d love to audition for it,” he said. “I’m a bit of a hopeless romantic at times, and I think Liam can be as well.”