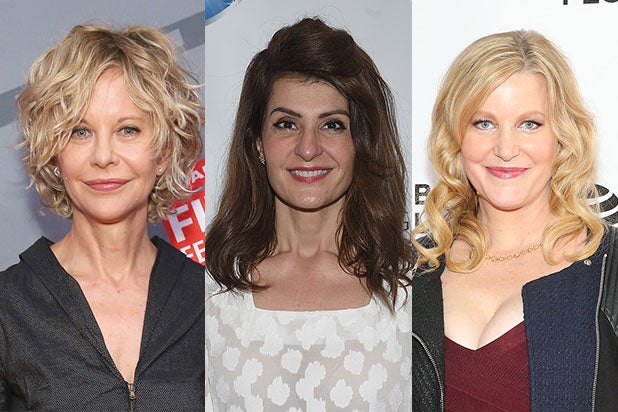 Various directors and actors will also be in attendance at the festival championing women and diverse voices in media, which runs from May 3 to May 8.

The Bentonville Film Festival will also feature screenings of movies including “Captain America: Civil War” and Ryan’s directorial debut “Ithaca,” as well as previously released films such as “My Big Fat Greek Wedding 2” and “God’s Not Dead 2.”

The Film Festival has also partnered with Bentonville’s First Friday to showcase classics like “Stuart Little” and the original “Ghostbusters” on May 6.

Overall, the competition features 34 films, including 16 documentaries and 18 narratives. The festival comes with a guarantee of theatrical, broadcast, digital and retail home entertainment distribution for winners.

See all of the studio showcase screenings below.

“American Wrestler: Wizard” is based on a true story of a teen who escapes during the Iranian revolution with only his life, immigrates to North California, and faces racism, bullying and general American hostility due to the American hostage crisis in Iran. Against all odds, and surpassing the community’s expectations, he succeeds in becoming a State Wrestling Champion.

A family of scientists is on the brink of discovering a powerful longevity serum when all of a sudden a mysterious force abducts them, leaving their young daughter April behind. Ten years later, April (voiced by Academy Award nominee Marion Cotillard) lives alone with her dear cat, Darwin, and carries on her family’s research in secret. But she soon finds herself at the center of a shadowy and far-reaching conspiracy, and on the run from government agents, bicycle-powered dirigibles and cyborg rat spies. Undaunted, she continues her quest to find her parents and discover the truth behind their disappearance.

Marvel’s “Captain America: Civil War” finds Steve Rogers leading the newly formed team of Avengers in their continued efforts to safeguard humanity. But after another incident involving the Avengers results in collateral damage, political pressure mounts to install a system of accountability, headed by a governing body to oversee and direct the team. The new status quo fractures the Avengers, resulting in two camps; one led by Steve Rogers and his desire for the Avengers to remain free to defend humanity without government interference, and the other following Tony Stark’s surprising decision to support government oversight and accountability. Get ready to pick a side and join the nonstop action playing out on two fronts when Marvel’s “Captain America: Civil War” opens in U.S. theaters on May 6, 2016.

A reboot of the 1976 TV series with two of the most popular YouTube stars of today.

While doing her community service at a horse rescue ranch, Emma forms an unlikely bond with an abused show horse who won’t let anyone ride him. Gaining new skills and confidence, Emma hatches a plan to redeem herself and ultimately save the ranch she’s grown to love.

“Equity,” the first female-driven Wall Street film, follows a senior investment banker who is threatened by a financial scandal and must untangle a web of corruption.

The story of the rise and fall of an African American vocal group.  Special guest Robert Townsend will be participating in the Q&A following the screening, moderated by Gil Robertson.

On the night Suzanne Waters celebrates her retirement she is faced with a series of crisis that she could not have imagined. Trusting God’s Direction, her “North” becomes clear as she takes in a delinquent teenager, Eli. Her connection with Eli reveals a miraculous blessing that brings her and her son David’s family through healing and a joyful confirmation that God has a Plan for each of us, our True North.

When a high school teacher is asked a question in class about Jesus, her response lands her in deep trouble.

Academy Award winning actress Sally Field stars in this film about A self-help seminar that inspires a sixty-something woman to romantically pursue her younger co-worker.

Fourteen-year-old Homer Macauley is determined to be the best and fastest bicycle telegraph messenger anyone has ever seen. His older brother has gone to war, leaving Homer to look after his widowed mother, his older sister and his 4-year-old brother, Ulysses. And so it is that as spring turns to summer, 1942, Homer Macauley delivers messages of love, hope, pain… and death… to the good people of Ithaca. And Homer Macauley will grapple with one message that will change him forever. Based on Pulitzer Prize-winning author William Saroyan’s 1943 novel, The Human Comedy, ITHACA is a coming-of-age story about the exuberance of youth, the abruptness of change, the sweetness of life, the sting of death, and the sheer goodness that lives in each and every one of us.

Maggie’s plan to have a baby on her own is derailed when she falls in love with John, a married man, destroying his volatile marriage to the brilliant Georgette.

A Portokalos family secret brings the beloved characters back together for an even bigger and Greeker wedding.

It’s 1982, and Taeko (Daisy Ridley) is 27 years old, unmarried, and has lived her whole life in Tokyo. She decides to visit her relatives in the countryside, and as the train travels through the night, memories flood back of her younger years: the first immature stirrings of romance, the onset of puberty, and the frustrations of math and boys. At the station she is met by young farmer Toshio (Dev Patel), and the encounters with him begin to reconnect her to forgotten longings.

James, down on his luck and desperate for some quick cash, agrees to drive a small truck across country. He soon realizes that he’s made a huge mistake and has inadvertently become involved in a dangerous human trafficking ring. The unlikely hero risks it all to shut down the trafficking ring and save the woman he is falling in love with.

Race is based on the incredible true story of Jesse Owens, the legendary athletic superstar whose quest to become the greatest track and field athlete in history thrusts him onto the world stage of the 1936 Olympics, where he faces off against Adolf Hitler’s vision of Aryan supremacy. Race is an enthralling film about courage, determination, tolerance, and friendship, and an inspiring drama about one man’s fight to become an Olympic legend.

“ROOTS” is a historical portrait of American slavery recounting the journey of one family and their will to survive and ultimately carry on their legacy despite hardship.