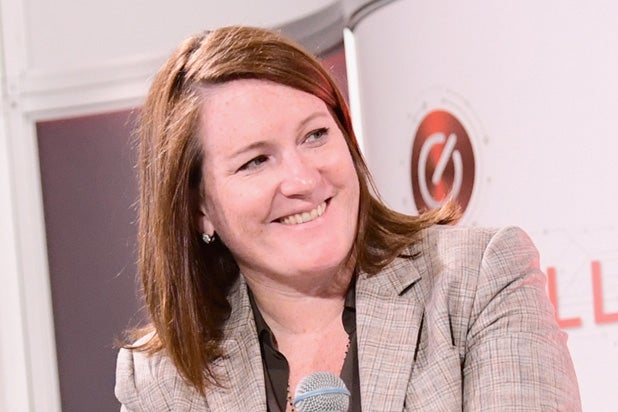 She will begin her duties in February 2019, succeeding Greg Foster, who has been at the large-format movie company since 2001.

Colligan served in executive roles at Paramount from 2006 to 2017, during which she oversaw the launch of the “Paranormal Activity” franchise and headed up worldwide distribution during the last three years of her tenure.

Prior to that, Colligan was head of the studio’s domestic marketing, overseeing campaigns for the first phase of the Marvel Cinematic Universe with films like “Iron Man” and “Captain America: The First Avenger,” as well as that of the “Transfomers” franchise.

However, she resigned from her post last fall citing “gender bias” at Paramount, later reaching a legal settlement with the Viacom-owned studio.

According to IMAX CEO Rich Gelfond, Colligan was selected for her connections to both major Hollywood studios and streaming companies like Netflix and Amazon, the latter of which currently employs Colligan as a consultant.

As Netflix expands its film division and Amazon looks to produce mass-appeal blockbusters under new head Jennifer Salke, IMAX is hoping to bring some of its planned productions to its premium screens.

“The business is evolving and it’s incumbent on us to have relationships with everybody and never miss an opportunity,” Colligan told TheWrap. “Working with the top filmmakers and the biggest films from all the studios isn’t too shabby, but I’m also interested in the grey areas where new opportunities exist. IMAX is distributing films and expanding in markets around the world, and figuring out ways we maximize the potential of those films and ventures is particularly interesting to me.”

Colligan will take charge of IMAX shortly after the release of M. Night Shyamalan’s “Glass,” which will appear on IMAX screens nationwide. Other films set for wide IMAX release next year include “Avengers 4,” “It: Chapter Two” and “Wonder Woman 1984.”

Also Read: Imax Reports Q2 Earnings Above Expectations on Back of Blockbuster Releases

“Megan has a unique perspective on how it is evolving and what IMAX can do to grow our global entertainment business in new and innovative ways,”  Gelfond said in a statement. “Her strong relationships with film studios, exhibitors, filmmakers and talent around the world will help us take our already robust partnerships to new levels and build exciting new ones.”

Colligan’s arrival brings an end to Foster’s 18-year tenure at IMAX, where he served as CEO of the entertainment division since 2013.

During his tenure, Foster helped grow IMAX into a format synonymous with the biggest blockbusters of the year, contributing to their box office success while developing relationships with filmmakers like J.J. Abrams, Christopher Nolan, and Damien Chazelle, whose latest release, “First Man,” was made using IMAX cameras and audio technology.

“I’d like to thank Greg for his dedication and commitment to building IMAX’s blockbuster film business and contributing to our overall success,” Gelfond said. “He is a great friend who has worked tirelessly for IMAX and I’m grateful for his enormous contributions over nearly two decades.”