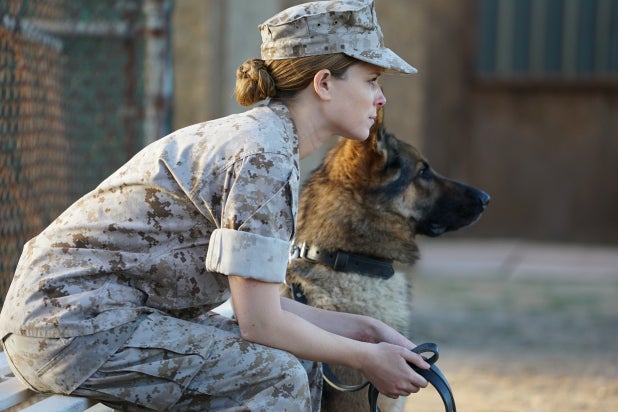 There are certain types of stories that go together perfectly, and others that just don’t feel like natural matches. Unless you’re coming to the material with the experience of, say, Steven Spielberg, “violent war biopic” and “inspirational animal drama” are a tricky combo.

So while it’s perhaps no surprise that director Gabriela Cowperthwaite struggles to weave these disparate threads together in “Megan Leavey,” she ultimately does her heroes — both of them — proud.

Cowperthwaite is a documentary filmmaker best known for “Blackfish,” which bluntly upended any fond memories of family trips to SeaWorld. She takes a similarly straightforward approach to this fictionalized account of the real Leavey’s history as a U.S. Marine.

As played with compelling intensity by Kate Mara, Megan is an aimless 20-year-old sleepwalking through her dreary life in 2003. She’s grieving the recent death of her best friend, has nothing but contempt for her selfish mother, Jackie (Edie Falco), and barely even sees her overworked dad, Bob (Bradley Whitford).

After she gets fired from her dead-end work, Megan surprises everyone, including herself, by impulsively signing up to join the Marines. So far, so familiar: she goes through training, gets yelled at a lot, and blows off steam with a drunken, but fairly innocent, night off.

That otherwise forgettable evening changes her life when her commander catches her stumbling out of a bar, and she’s forced to report for punishment: cleaning out the dog cages of the K9 bomb-sniffing unit. It’s a messy job, but also an unexpectedly rewarding one. Before long, Leavey has bonded with Rex, the maddest, meanest dog in the place. And soon after that, they’re both shipped off to Iraq, where they’ll have to face every new, and increasingly terrifying, challenge together.

Early on, someone observes that Megan “just doesn’t connect with people very well.” This doesn’t seem to be a fair assessment, since she appears equally comfortable partying with her all-male unit and parrying with her gruff superior, Sergeant Martin (Common, bringing just the right amount of warmth).

But it may be true for Cowperthwaite, whose twin priorities, animals and action, are unabashedly apparent. She has a particularly strong handle on the war scenes, resisting the brutal excess of many combat movies while still ratcheting up palpable tension.

As a result, it’s equally unbearable to watch Megan and Rex tentatively search for bombs through frenzied urban streets and in silent, seemingly abandoned rural homes. Credit also goes to cinematographer Lorenzo Senatore (“Risen”) and editor Peter McNulty (“42”), who know how to depict each new threat without leaving us feeling manipulated.

The filmmakers — including screenwriters Pamela Gray, Tim Lovestedt, and “Bridesmaids”‘ scribe Annie Mumolo — use the same restrained patience to build a touching connection between Megan and Rex. Soon, it seems perfectly reasonable that an emotionally isolated soldier would consider a German shepherd to be her one true soul mate. Their loyal alliance (and it really does feel like friendship) proves the perfect balance for all the ugliness they experience together.

Cowperthwaite falters, though, when she has to step outside this tight bond. She speeds through boot camp and training, and devotes no effort to contextualizing Megan’s experience as one of the first women on the front lines in Iraq. She also rushes Megan’s relationship with fellow soldier Morales (Ramon Rodriguez, “Iron Fist”) to such a degree that their romance feels like a reluctantly-added afterthought.

It may be inevitable, then, that the actors wind up on equally uneven footing. Mara wisely begins by presenting Megan as a stoic, almost stone-faced cipher. This gives her room to open up slowly with Rex, as they help heal each other. And when they’re forcibly separated, with Megan already struggling to overcome physical and emotional trauma, the split hits especially hard.

But with Mara and Varco — the primary dog who plays Rex — getting all the focus, their cast members are put at a distinct disadvantage. Most disappointing is the way Falco is wasted: why hire a great character actress if you’re not going to give her a real character to create? And the disregard for supporting performers extends all the way out: it’s almost laughable, and certainly distracting, to note how little resemblance the patrician Andrew Masset, in a brief appearance, bears to New York senator Chuck Schumer (who assisted Megan after her second deployment).

Whitford, at least, offers some tantalizing hints of tenderness, even if they’re never given space to develop. And Rodriguez does manage to expand his two-dimensional role with some sensitivity. But as you watch his tentative smile, you can’t help thinking that he, too, knows he’ll always come in second to the dog.