Just four hours after the announcement of his death, Jackson had the number-one slot on the album download chart at Apple’s iTunes store, "The Essential Michael Jackson." 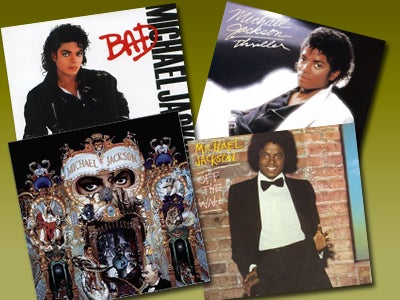 Eight of the top 10 videos were by Jackson with the video for "We Are the World," which Jackson co-wrote and performed on, taking up another slot.

Solo albums by Jackson and the Jackson 5 occupied the top 15 slots on Amazon’s sales chart. "Thriller" was tops, followed by "Bad," "Off the Wall" and two hits collections. Neither Apple nor Amazon give out specific sales figures.

An executive with a former major chain store who requested that he not be identified said his company’s stores saw a rush on Janis Joplin records when she died in 1970, and after that, the stores were prepared to display records whenever a performer passed away. Elvis Presley’s sales far outdistanced those of other performers, with John Lennon estimated to be the second biggest seller post-death.

It’s likely Jackson’s death will eclipse them all. Terry Currier, owner of Music Millennium in Portland, Oregon, said he received a phone call Thursday afternoon from a local TV station to comment on Jackson’s death and that the station was interested in filming at his store."I hung up the phone and immediately called (a wholesaler)," Currier said. "We had about 30 or 40 pieces in stock and I knew that if I didn’t order them right then I’d have nothing through the weekend."

Indeed, despite his troubles and tabloid appearances, Jackson has continued to mine gold.

When tickets went on sale for the 50 shows in London, the response was an astounding 16,000 web hits per second. If everyone who logged on had been able to purchase the tickets, the approximately 1 million tickets available would have sold out within 70 seconds.

The instant sell-outs reinforced the intensity of Jackson’s celebrity, especially internationally, and the faith his fans have in his ability to deliver a show like no other. Jackson’s concerts during the peak of his fame in the late 1980s were astoundingly elaborate affairs that were so expensive to mount that, in the long run, they were almost guaranteed to lose money.

Live performance was the final avenue for Jackson, whose named had been bandied about for an extensive residency in Las Vegas after he landed in financial hot water after prolonged legal battles. Jackson, winner of 13 Grammys and one of the few people to be inducted into the Rock and Roll Hall of Fame as a solo artist and a member of a group, had to refinance his music-publishing deal with Sony/ATV to retain control of the Beatles catalog and other valuable copyrights; he had to walk away from his Neverland Ranch.

The copyrights were Jackson’s primary assets over the last decade as his albums had largely stopped selling. The income they provided him throughout the 1980s and ’90s was staggering. But just as much as Jackson sold well, so, too, did he spend in his later years with his label, Epic.

"Invincible," Jackson’s last record for the label, was released in 2001 almost two years after it was expected. It exceeded retailer’s expectations upon release, moving 366,000 copies in its first week and opening at number one. It had no break-out hit.

Released in November, most retailers predicted it would not be a strong seller through the holidays and it struggled to get to 2 million sold. Insiders at the time suggested the album would have needed to sell three or four times as many as that to break even.

There’s no denying, however, that Jackson travelled in his own universe as star attraction globally. The widely used estimate is that Jackson’s albums have sold 750 million copies and that "Thriller" made up about 100 million in that total.

It was the first album to yield seven top 10 singles. And because of some prescient negotiating by his team before its release, Jackson made an astronomical mechanical royalty rate of $2 per album in addition to the money he received as a songwriter.

His debut solo album, "Off the Wall," moved 7 million copies and the followup, "Bad," sold 8 million in the U.S. and produced five top 10 singles. (It has reportedly sold 30 million worldwide). The Bad World Tour, which started Sept. 12, 1987 and ended Jan. 14, 1989, had 123 concerts, was seen by 4.4 million people and grossed $125 million. The audience size and grosses were records for any performer at the time.

His last tour, a 13-month trek that began in September 1996, promoted his compilation album "HIStory," was seen by 4.5 million people.

In 1991, Sony Music gave Jackson a $65 million deal to stay with the distributor’s Epic label. His first release under the new pact was "Dangerous," which moved 8 million copies in the U.S., more than 30 million worldwide.

But it was shortly thereafter that Jackson’s life became tabloid fodder, from the purchase of the Elephant Man’s bones to molestation accusations and trails, a public spat with then-head of Sony Music Tommy Mottola and odd television interviews.

Through it all, though, his reputation as a performer remained untarnished and he was welcome in many countries around the world and praised when he visited exotic outposts.

It’s no surprise that as rush hour traffic was building through Los Angeles on Thursday afternoon, the sounds of Jackson’s career came blaring from one car window after another. A dance remix of "Thriller," the Jackson 5’s "I Want You Back" on an oldies station, "Billie Jean" — they all demonstrated the power of his music and how long an industry banked on his stardom.