Following a very public confrontation between Tucker Carlson and a man from Montana over the weekend, the hosts of “The View” are thinking about where they stand on the concept of calling out public figures. And Meghan McCain feels like she and her co-hosts are at just as big of a risk.

On Monday’s show, the panel of women were relatively split on how they felt about the incident. While they each acknowledged their own distaste for Carlson, they also added that they don’t necessarily believe in public confrontations. McCain, in particular, worried that this confrontation could be the start of a precedent.

“As incendiary as many people find Tucker Carlson, they find the women on this show equally incendiary, for different reasons,” McCain said. “So if it’s OK and to be expected, maybe there’s an expectation that wherever we go, it’s OK for people to come up to us and scream things and say things.” 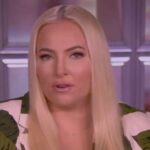 McCain noted that she personally felt that Bailey was being “a total jackass” and “incredibly rude,” and argued that he owes Carlson an apology for the confrontation.

McCain continued, adding that allowing public confrontations to happen like this, even with controversial figures, is “a slippery slope.” She noted that she and her husband now have conversations regularly about things like which restaurants they feel safe going to, and where they feel they can take their daughter in public.

She then doubled down on her argument that she and her co-hosts are just as controversial as Carlson for some people.

“I know how much people don’t like Tucker Carlson. People equally don’t like Meghan McCain and Joy Behar and Sunny Hostin and Whoopi and Sara. When you’re putting your opinion out there, you’re making yourself a target,” McCain said.

“Ambushing Tucker Carlson while he is in a store with his family is totally inexcusable — no public figure should be accosted regardless of their political persuasion or beliefs simply due to the intolerance of another point of view,” a Fox spokesperson told TheWrap.

You can watch the full segment from “The View” via the video above.