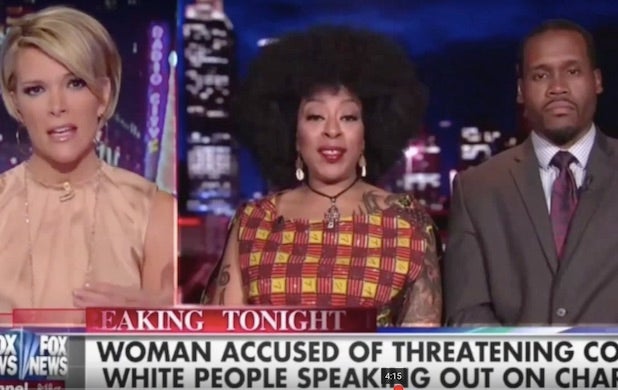 Megyn Kelly confronted a woman on the air on Monday for declaring “open season on crackers” and police.

“The systematic killing of black people has to be addressed,” Latausha Nedd told the Fox News host, criticizing the murders of young black men at the hands of police.

Nedd made the strong statements in a video, and was arrested after authorities noticed it.

“I say, let’s have a take a gun day, and start walking up on these untrained and stealing their weapons,” she said in the video.

Nedd said that the video came to light after she was hacked online and received violent threats.

Kelly countered that if someone threatened her, she wouldn’t respond by using the term “cracker” and pointing a gun at the camera.

Nedd asked why is it that “no one seems to have a problem with” using the N-word, but “when I use the word ‘cracker,’ now I’ve become a terrorist?”

Kelly shot back that she doesn’t believe no one has a problem with the N-word.