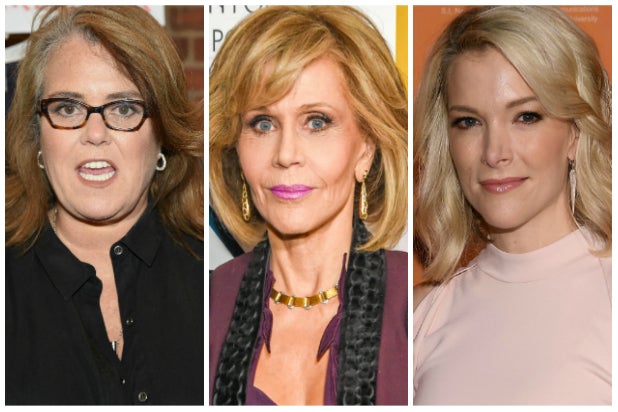 Megyn Kelly took Jane Fonda to the woodshed Monday on “Today” after the 80-year-old actress criticized the NBC News morning show host for a plastic surgery question the journalist posed months ago. Rosie O’Donnell, for one, was not impressed with Kelly’s comeback, which basically focused on Fonda’s very public anti-Vietnam War stance.

The former “View” host wrote the following on Twitter: “Megyn Kelly is a moron – spineless wanna be barbie – she sucks and so does her show.”

O’Donnell, who added hashtags #jane and #usuckmegyn, wasn’t alone in her analysis of the 9 a.m. hour’s editorial moment. Read 15 more highly unsupportive (to Kelly) tweets below — some of which were in direct response to O’Donnell.

There were plenty more where these came from, and the general social media sentiment seems to be heavily in favor of Fonda.

Also Read: Megyn Kelly Fires Back at Jane Fonda: 'She Has No Business Lecturing Anyone' (Video)

Let's be clear, Megyn Kelly is being who she's always been, a disrespectful Fox Propagandist. NBC hiring her casts a true stain. https://t.co/lc4Vf2iaLJ

I would be more likely to watch clothes tumble in my clothes dryer than watch Megyn Kelly.#NBCToday

Jane Fonda is a feminist icon, an artistic genius, an exercise mogul, a national treasure. Megyn Kelly is famous for assuring children on a 10pm cable news broadcast that Santa Claus is white.

It is possible to think Donald Trump is a jerk for his attacks on Megyn Kelly and also that Megyn Kelly is horrible.

Megyn Kelly: This woman is FIXATED on something that happened *months ago*!!!

Just rename #MegynKellyToday, Megyn Kelly's Fox Mean Girl Hour. That attack on Jane Fonda was one of the worst and embarrassing things I've seen on a NBC News program.

This is a small, mean, petty and pathetic attempt to generate attention for a fledgling show. Megyn Kelly is such a waste of airtime. pic.twitter.com/7DOLSs43vP

ICYMI, here's Megyn Kelly's embarrassing segment on Jane Fonda. I have never seen anything so petty coming from anyone at @NBCNews. Lashing out at the slightest hint of public criticism is conduct unbecoming of a news anchor. Hiring her was a huge mistake! pic.twitter.com/Hwzy4D9604

Megyn Kelly coming for Jane Fonda is not even in the top 500 of idiotic things she’s done.

She then used it to mock a gay lawyer who came to meet Will&Grace cast.

Her production team cursed on air.

Now she is using the show to explicitly harass Jane Fonda.#CancelMegyn

@Janefonda has more class, intelligence, life-experience, wit, and beauty in that little piece of cancer they recently removed from her lip than Megyn Kelly would ever hope to have in her lifetime! #TeamFonda

TheWrap reached out to Kelly’s reps for comment on the blowback. We did not immediately hear back.

Though Kelly is quiet for now, she was heard loud and clear earlier.

“Honestly, she has no business lecturing anyone on what qualifies as offensive,” the Fox news alum said on this morning’s show.

“Look at her treatment of our military during the Vietnam War, many of our veterans still call her ‘Hanoi Jane’ thanks to her radio broadcasts, which attempted to shame American troops,” Kelly told her audience. “She posed on an anti-aircraft gun used to shoot down our American pilots.”

“[Fonda] called our P.O.W.’s ‘hypocrites and liars’ and referred to their torture as ‘understandable,'” she continued. “Even she had to apologize years later for that gun picture — but not for the rest of it.”

“By the way, she still says she’s not proud of America,” Kelly went on. “So, the moral indignation is a little much.”

This isn’t the first time that Kelly and O’Donnell have been linked.

During a Republican primary debate leading up to the 2016 election, Kelly pressed Donald Trump on unkind things he’s said about women. The future president told her he’s only said those nasty things about O’Donnell.