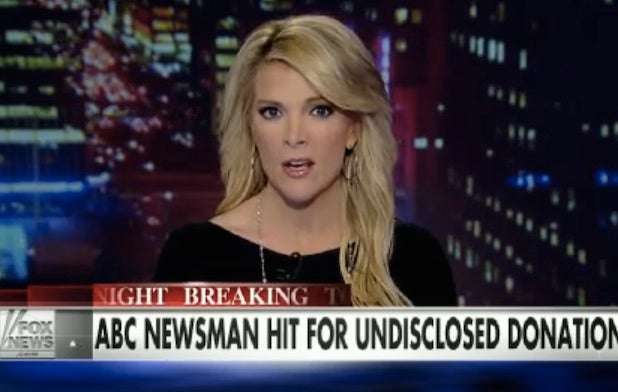 Megyn Kelly led her Fox News show Thursday by covering the controversy surrounding ABC anchor George Stephanopoulos, who she says “took a big hit” by failing to inform his employer and viewers that he donated $75,000 to the Clinton Foundation.

“It’s a bombshell that he was donating to the very foundation that he was cross-examining this author on without disclosing it,” Kelly said about Stephanopoulos pressing conservative author Peter Schweizer on his book, “Clinton Cash,” during an interview last month.

Fox News Howard Kurtz told Kelly this is a mistake that could unravel the ABC News anchor’s career.

“This blunder by Stephanopoulos is so severe that it really threatens to undo what he’s accomplished in his 18 years at ABC News,” Kurtz said, adding that the Clintons are his achilles heel because of his past resume of working in the Clinton administration.

Kelly posed the question: If Stephanopoulos recused himself as moderator for ABC’s Republican debate in February, can he cover the election at all?

Kurtz said ABC News gave him a “rhetorical slap on the wrist,” and pointed out Stephanopoulos recently telling Jon Stewart everybody knows donors to the Clinton Foundation get access and influence.