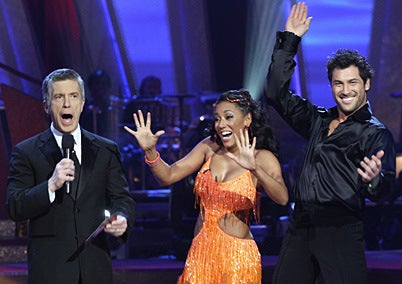 Former "Dancing With the Stars" contestant Mel B. may be returning to the ABC reality hit — as a host.

The erstwhile Spice Girl, who now hosts Oxygen’s "Dance Your Ass Off," told Accesshollywood.com that she auditioned to fill the "DWTS" post vacated by Samantha Harris.

Mel B. competed on the show during its fifth season, partnered with Maksim Chmerkovskiy.

It was unclear whether Mel B. was in the running to be a full-time co-host with Tom Bergeron, or one of a group of rotating co-hosts, a change that has been rumored.

Harris announced her departure from the show at the end of January, ostensibly in order to focus on her duties on the syndicated magazine show "The Insider," as well as "Entertainment Tonight." There was speculation at that time that Paula Abdul might join "DWTS," although ABC officials said that was unlikely.