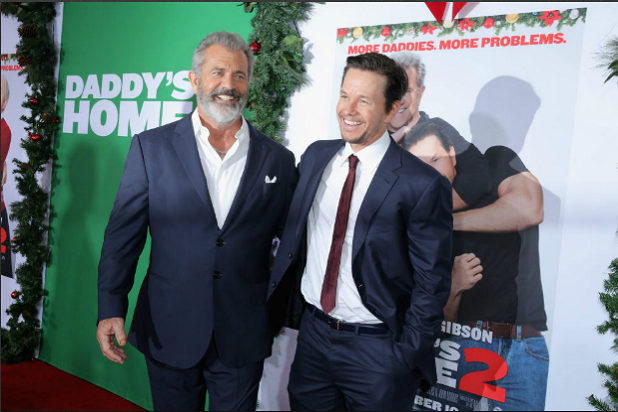 Mel Gibson is eyeing his “Daddy’s Home 2” co-star Mark Wahlberg for a key role in his next directing project, the WWII drama “Destroyer,” TheWrap has learned.

Meanwhile, Gibson is circling a role opposite Wahlberg in Warner Bros.’ remake of the ’70s TV series “The Six Billion Dollar Man” — which is targeting a summer production start ahead of a release next summer and ahead of the “Destroyer” shoot.

Reps for Warner Bros., Gibson and Wahlberg declined to comment.

It’s not clear what role Wahlberg might play in “Destroyer,” which is based on the John Wukovits book “Hell From the Heavens: The Epic Story of the USS Laffey and World War II’s Greatest Kamikaze Attack.”

The indie, which is targeting a fall production start, centers on the Battle of Okinawa in April, 1945 when the USS Laffey withstood 22 kamikaze attacks and earned the nickname “The Ship That Would Not Die.”

Gibson’s longtime girlfriend Rosalind Ross wrote the script. Gianni Nunnari’s Hollywood Gang Productions is producing “Destroyer,” which is not set up at any studio.

“The Six Billion Dollar Man” is set to go into production this summer for release on May 31, 2019. The movie is based on TV show that made Lee Majors a star as well as the novel “Cyborg” by Martin Caidin.

The story follows military officer Steve Austin (Wahlberg), who becomes part of a top-secret government program after a horrific accident leaves him near death. With the help of cutting-edge technology, Steve is brought back to life with extraordinary abilities, making him the world’s first truly bionic man.

If Gibson joins the cast, it would be the first onscreen pairing since last winter’s “Daddy Home 2” in which Gibson and Wahlberg played father and son.