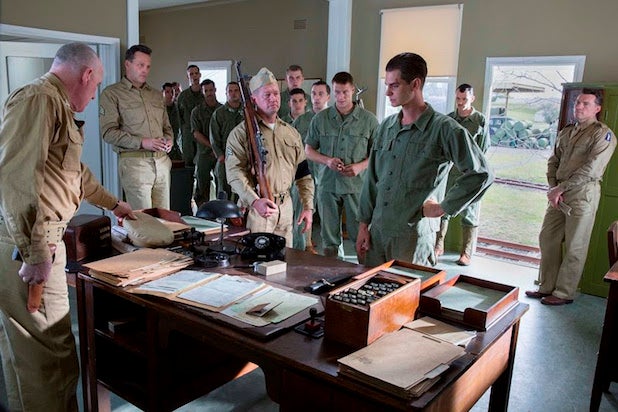 “Hacksaw Ridge” tells the extraordinary true story of conscientious objector Desmond Doss (Garfield) who, in Okinawa during the bloodiest battle of WWII, saved 75 men without firing a gun. Believing that the war was just but killing was nevertheless wrong, he was the only American soldier in WWII to fight on the front lines without a weapon.

Captain Glover (Worthington) is in charge of the unit, while Vaughn plays Sergeant Howell, whose job is to get the new recruits ready for battle. Bracey is Smitty Ryker, the alpha of the platoon that Doss belongs to. As an army medic, Doss single-handedly evacuated the wounded near enemy lines, braved fire while tending to soldiers and was wounded by a grenade and hit by snipers. He was the first conscientious objector to ever win the Congressional Medal of Honor.

The film also takes place in Doss’ hometown of Lynchburg, Virginia, and Palmer has been cast as his sweetheart Dorothy Shutte, with Griffiths playing Desmond’s mother, Bertha Doss.

Also Read: Michael Shannon, Andrew Garfield Are 'Magnetic' in '99 Homes' and 9 Other Reviews

“While production has only just begun, there is already incredible comradery between the cast,” said Gibson. “Not only is Andrew perfect for the role of Desmond Doss, the entire cast are an incredible mix of experience, depth and exciting up and coming talent.”

“Hacksaw Ridge” is Gibson’s first film as director since the Oscar-nominated “Apocalypto” in 2006. Gibson won two Oscars for directing and producing “Braveheart,” in which he also starred. His follow-up film, “The Passion of The Christ,” earned three Academy Award nominations.