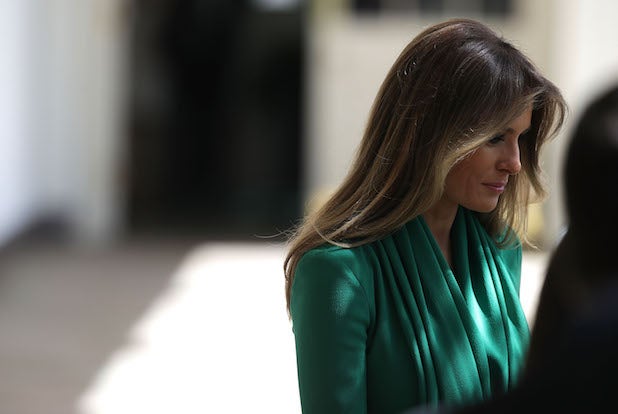 The president and first lady landed in Israel on Monday morning during Trump’s first international trip while in office. As the pair walked down the tarmac in Tel Aviv, Trump reached out for his wife’s hand, and she swatted it away. POTUS then used his rejected hand to adjust his tie. Smooth move, Mr. President.

Also Read: Did Melania Trump Favorite a Tweet Trashing Her Relationship With Donald?

Melania’s slap-back did not go unnoticed. Twitter is abuzz with reactions to the moment; with many praising FLOTUS for ignoring her husband’s hand and encouraging her to continue avoiding him because of his disrespectful behavior. Some are calling it the #swatheardaroundtheworld.

Here is a roundup of some of the best tweets.

I am obsessed with Melania. She's absolutely done with that monster. pic.twitter.com/eGKkqoy1pi

LOL! Melania in Tel Aviv is as MISERABLE, as Melania in the U.S. Watch her push away the CREEP's hand. PRICELESS????????????This guy is DISGUSTING! pic.twitter.com/lhR1JdTi1m

Melania swatting Donald away when he tries to hold her hand is… oooooff#swatheardroundtheworldhttps://t.co/IVxF9WHwhJ pic.twitter.com/8DmwA8SI4l

@ohheyjenna @HuffPost Melania! You Go Girl! Way to flick off #PussyGrabberinChief's sweaty little hand! I have a crush… #swatheardroundtheworld

Oh Melania @FLOTUS your face might be too frozen with Botox to show emotion but your hands sure as hell aren't!#swatheardroundtheworld

Being married to a supposed billionaire? Supposed billions. Swatting his hand away? Priceless. #swatheardroundtheworld https://t.co/BSnBgWexIQ

Most of America feels the same, Melania pic.twitter.com/Ibde9GWm5u

@raggapegs Trump looked over, saw they were holding hands, tried to do the same with Melania and she was like nope ????

@raggapegs She is really showing her disgust for Trump. Though I'm surprised he attempted to hold her hand, usually he leaves Melania miles behind..