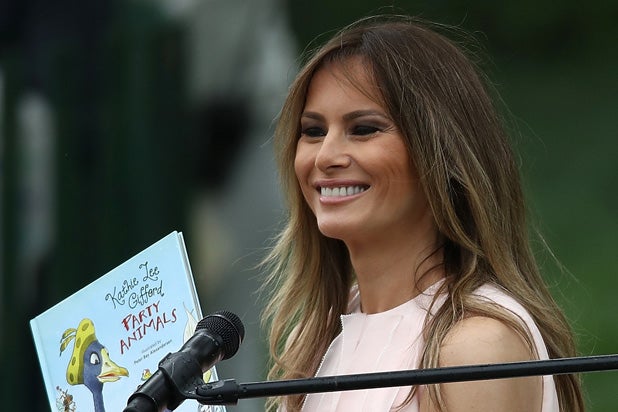 A school librarian in Cambridge, Mass., has turned down a Dr. Seuss book donation from First Lady Melania Trump, saying that the beloved children’s author’s books are filled with “racist propaganda.”

In a letter published in The Horn Book, elementary school librarian Liz Phipps Soeiro said Dr. Seuss was “a bit of a cliché” and had books that were filled with “racist propaganda, caricatures, and harmful stereotypes.”

“Open one of his books (‘If I Ran a Zoo’ or ‘And to Think That I Saw It On Mulberry Street,’ for example), and you’ll see the racist mockery in his art,” she wrote in rejecting the donation sent  to recognize National Read a Book Day, which was on September 6.

Phipps Soeiro also noted that her school is well-funded, with the city spending “well over $20,000” per pupil, but that other schools have libraries that are being shuttered and are in marginalized communities.

“Why not go out of your way to gift books to underfunded and underprivileged communities that continue to be marginalized and maligned by policies put in place by Secretary of Education Betsy DeVos?” she wrote. “Why not reflect on those “high standards of excellence” beyond only what the numbers suggest? Secretary DeVos would do well to scaffold and lift schools instead of punishing them with closures and slashed budgets.”

Also Read: I Can't Watch 'Designated Survivor' Without Imagining How Trump Would Mess Up Every Situation (Commentary)

In a letter enclosed with her donation, the first lady explained that it chose the schools based on the Department of Education’s standards of excellence.

She said that she sent a copy of “Oh, the Places You’ll Go!” because she and her son Barron used to read it.

A White House statement said that nine other Seuss books would be sent, including “The Cat in the Hat” and “Green Eggs and Ham.”

On National #ReadABookDay I encourage everyone to read a book. Let every page educate you & take you on an exciting journey!

“While we enthusiastically support the political engagement and passion of our employees, in this instance the editorial posted online gave the impression that the statement reflected the position or actions of the Cambridge Public Schools,” the district said. “Our school district did not authorize any such statement.”

Phipps Soeiro enclosed  a list of children’s books that “offer you a window into the lives of the many children affected by the policies of your husband’s administration.” That list included books by authors of color and with stories concerning immigration.

The comments on the librarian’s post are mixed, with many thanking the librarian for her words but others condemning her for calling out Dr. Seuss and for not accepting a gift.

“This is a great, thoughtful, honest letter. It would be nice if it fell on open ears,” said one commenter.

“Slapping the face of a gift-giver, in my part of the country, is considered rude,” said another.