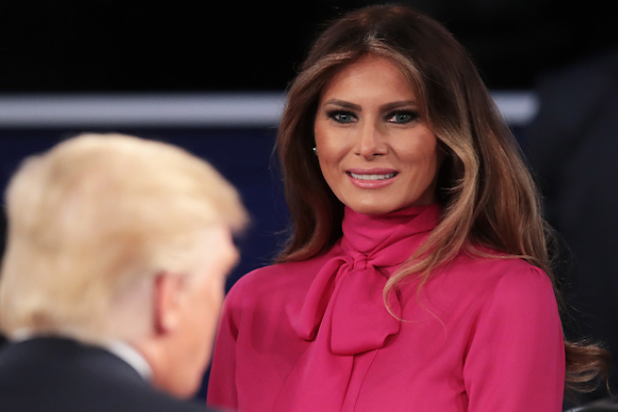 Melania Trump told CNN’s Anderson Cooper that Donald Trump was “egged on” in the notorious 2005 tape in which he made controversial comments about women that she called “boy talk.”

“I said to my husband that, you know, the language was inappropriate. It’s not acceptable. And I was surprised, because that is not the man that I know,” Melania Trump said in an interview that airs Monday night on CNN.

Mr.s Trump said the incident was “boy talk, and [Trump] was led on — like, egged on — from the host to say dirty and bad stuff.”

She continued, “As you can see from the tape, the cameras were not on — it was only a mic. And I wonder if they even knew that the mic was on.”

Earlier this month, The Washington Post published a video tape of Trump on a hot mic boasting to Bush about kissing, groping and having sex with women.

Bush has been suspended by NBC for his role in the conversation and likely won’t return to the network. Bush’s attorney, Marshall Grossman, told TheWrap on Saturday that a settlement has not yet been agreed upon — and disputed reports of an eight-figure settlement of the TV personality’s contract with NBC and “Today.”

Despite chalking it up as “boy talk,” Melania told Cooper she was surprised by the conversation. “I don’t know that person that would talk that way, and that he would say that kind of stuff in private,” she said.