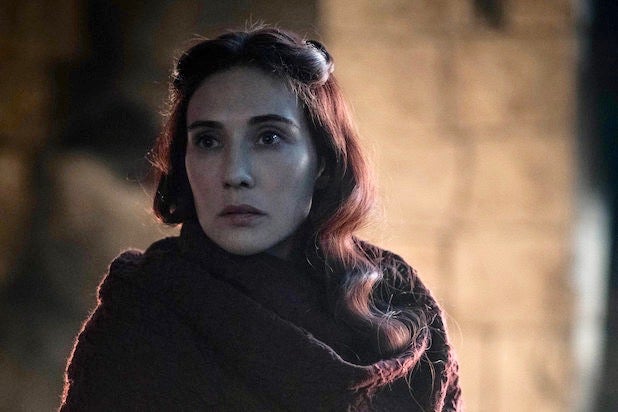 Arya Stark may have been the one to actually slay the Night King, but she couldn’t have done it without Melisandre. Yes, if the Red Woman hadn’t returned just before the Battle of Winterfell began on Sunday’s “Game of Thrones,” everyone at the Starks’ ancestral home would have been totally screwed and we all know it, including Carice van Houten, the actress who plays Melisandre.

Missing from “GoT” since she rowed away during Season 7, but promised she’d have to return to Westeros to meet her maker, Houten told TheWrap on Tuesday that she is “very satisfied” with how this all played ultimately out for Mel, who rolls up to light a bunch of stuff on fire and lead Arya (Maisie Williams) to her destiny to kill the White Walker king before wandering into the dawn to die of her truly, very old age.

“I thought it’s a short return for her and it’s good,” van Houten told TheWrap. “It goes out with a bang and it’s very clear to everyone what I’ve been doing all this time. It’s beautiful. It’s emotional. Even I even sort of got the chills when I read it and I was very happy with that elegant, subtle ending in a very big episode.”

Sunday’s episode of the eighth and final season, titled “The Long Night,” included several callbacks that were years in the making, including Mel’s “brown eyes, green eyes, blue eyes” line to Arya, which is first spoken by the Red Woman to the Stark girl back in Season 3 (albeit in a different order) as a prediction about all the lives Arya will take or eyes she will “shut forever.”

In Sunday’s episode, the phrase was a trigger that sent Arya running off to kill the Night King. But did van Houten know how important those words were when she first said them many moons ago?

Also Read: 'Game of Thrones' Breaks Series Record With 17.8 Million Viewers for the Battle of Winterfell

“I didn’t really expect to know what I’m saying, but at the same time I also knew it was not just a random, weird thing,” the actress told us. “And I knew that it was so significant and [showrunners David Benioff and D.B. Weiss] did say ‘we’re going to come back to that and we’re going to come back to your age.’ So I knew that, but I was never really sure. But also, at the same time, Melisandre herself was never really sure. She was just a vessel trying to read the flames and read the Lord of Light as best as she could, obviously making some mistakes along the way. But I did know that this was setting something up.”

When we asked her to weigh in on the fan theory that those remaining pair of green eyes (since the brown seem to belong to Walder Frey and the blue are, obviously, the Night King’s) are Cersei Lannister’s, van Houten shut up real quick.

“Oh my God! I’m so afraid to say things about that because I might really make mistakes here and people will never ever forgive me. I’ve just won a few sympathy points, can we leave it at that?”

And then when we asked her to tell us if we can expect to learn more about the Azhor Ahai a.k.a. Prince/Princess That Was Promised prophecy before the series is over — or if it’s all a total wash now, since Arya was the one to kill the Night King, not Jon Snow (Kit Harington) or Daenerys (Emilia Clarke), and Melisandre was definitely already wrong about Stannis — van Houten shut up again.

“I’m still burdened with that fear of saying anything!” she said. “It’s funny, the other day I posted something to Instagram and someone from HBO said, ‘No! You can’t post that! You can’t post anything that’s not been aired yet.’ And I said, ‘It’s from Season 5! Stannis is still alive in the background!’ So I am still in that. I can’t say anything yet until it’s all over.”

As far as things she can say, van Houten told TheWrap she is glad Melisandre went out like a “boss” on her own terms, taking off her necklace and wandering away to wither into dust and die after the battle. However, that did mean Davos (Liam Cunningham) didn’t get to kill her and avenge Shireen, and she has mixed feelings about taking that away from him.

“It was a bit of both, because he also sees the fragility of her once she takes the necklace off and she’s so powerful and always been quite powerful,” van Houten said. “And in the end, they wanted the same thing, they just were coming from different ways. They were both on Stannis’ side, so they had a lot in common in fact, as well. And it was funny because Liam texted me, ‘You were absolutely wonderful in the episode. I’m sorry I didn’t get to kill you.’ Yeah, I took that away from him a little bit. But I don’t think it was mean, it was more, ‘spare yourself the trouble.'”

She also understands fans’ frustration with knowing so little about Melisandre, but thinks “it’s better that we keep people hungry than make them fed up.”

“It would have been great to see and know a bit more about her and her childhood as a slave, but on the other hand, the fact that she was so mysterious is part of why she’s interesting, I guess,” she said.

And, before we let the Red Woman go, we asked her to tell us what her favorite Melisandre scene of all time was and she chose the burning of Shireen Baratheon a.k.a. the reason Davos wanted to kill her in the first place.

“I have just burned Shireen and I think that was a good thing — and of course we all know that was a horrible thing,” van Houten told us. “And then she hears someone say, ‘Well, it didn’t do anything. All the horses have gone, everyone’s gone.’ There was some sort of message and we find out the burning of Shireen had no effect. And that’s the moment where my character’s arc completely changes and where there’s finally room for doubt.”