Apparently Melissa Joan Hart is managing to keep herself busy after the cancellation of “Melissa & Joey.”

The former “Sabrina, the Teenage Witch” star spent a good portion of Friday — the 14th anniversary of the September 11th terrorist attacks — complaining on Twitter about the coverage of the tragedy on cable news.

“Extremely disappointed in @foxnews and @CNN for not having continual coverage of Sept11 memorial &names listed on the banner!!” Hart wrote earlier Friday, accompanied by the hashtag du jour, “#neverforget.”

Hart wasn’t done there. She went on to suggest that the networks had let down her kids.

Extremely disappointed in @foxnews and @CNN for not having continual coverage of Sept11 memorial &names listed on the banner!!#neverforget

“My children need to know that this day changed our lives in the U.S. and the world and without solid news coverage, I’m discouraged,” Hart continued. And then it got real. And nasty, as the actress dragged America’s own version of royalty, the Kardashian clan, into her social-media screed. “If Kardashians can be covered 24/7 why can’t we have one day dedicated to a moment in history that changed our path?” Hart pondered. “I don’t need to see tragedy, I need to see stories of healing &memory!” 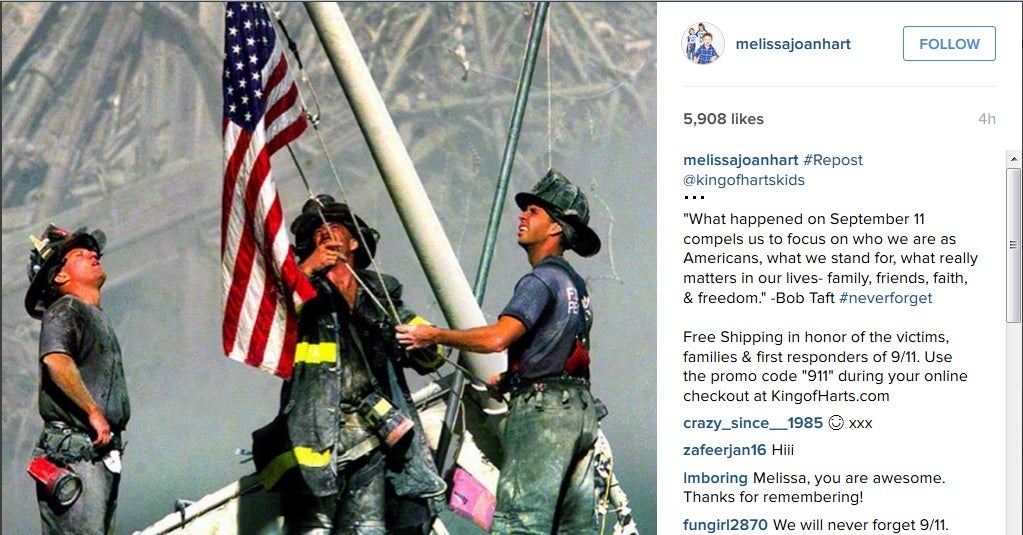 In the face of cable news’ apparently inadequate coverage of the anniversary, Hart provided further commentary, reposting an Instagram message from the Got Your 6 campaign, which unites the entertainment industry with veterans nonprofits.

“It has been 14 years since tragedy struck our nation,” the message read. “In the face of adversity, we have come together and displayed our unwavering strength. And today, we remember and honor those who lost their lives on 9/11.”

After lambasting the news media for not properly remembering the national tragedy of Sept. 11, 2001, Hart worked in a plug for her company, King of Harts, noting that the clothing line is offering free shipping in honor of those who had been affected by the attacks.

“Free Shipping in honor of the victims, families & first responders of 9/11,” Hart noted in an Instagram post. “Use the promo code ‘911’ during your online checkout at KingofHarts.com.”