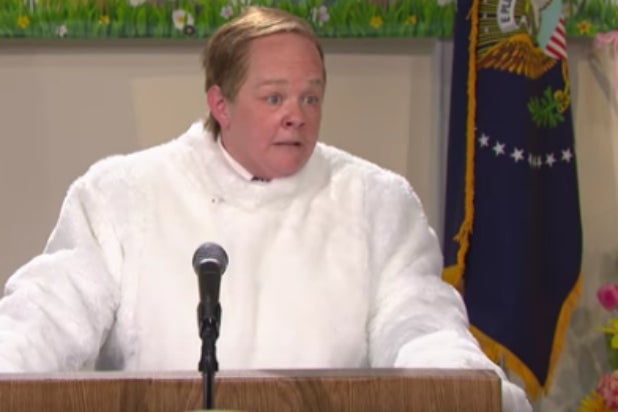 “SNL” went live coast-to-coast this past weekend, and so did the sketch comedy show’s production team.

Melissa McCarthy’s latest Sean Spicer mockery — an Easter-Passover version — was actually shot in Los Angeles. The “Mike & Molly” alum used hashtag #LiveFromLA in an Instagram post from her own empty studio, and “Saturday Night Live” confirmed to TheWrap that the skit was filmed 3,000 miles away from 30 Rock. That’s a rarity for the show, and it helps explain why the pacing didn’t line up perfectly to the New York City laughs.

Watch her sketch here to see what we mean.

In the remote skit, McCarthy’s Spicer took the podium at the White House dressed as the Easter Bunny for the annual Easter Egg Roll. She took the opportunity to apologize for Spicer’s real-life comments comparing Syrian president Bashar al-Assad to Adolf Hitler.

“Yeah, you all got your wish this week. Spicy finally made a mistake,” McCarthy said. “As we all know, President Trump recently bombed Syria, while eating the most beautiful piece of chocolate cake America has ever seen. That’s a fact! People wanted to look at the cake.”

Fake Spicer then moved on to address real Spicer’s comments about Assad and Trump’s Syrian bombing this week. It didn’t get any more comfortable from there.