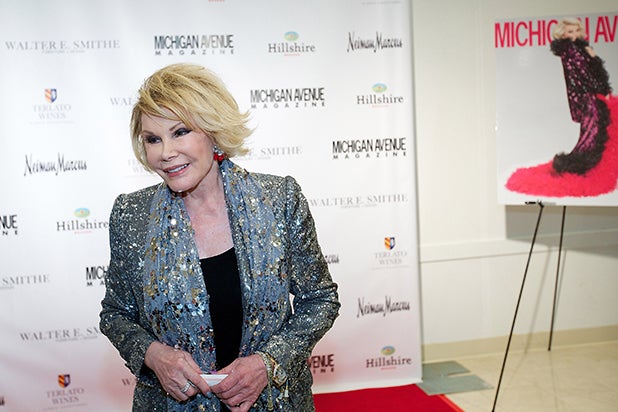 The lawsuit brought by the daughter of Joan Rivers over the late comedian’s death has been settled, Melissa Rivers says.

In a statement Thursday, Melissa said that she is now “able to put the legal aspects of my mother’s death behind me and ensure that those culpable for her death have accepted responsibility for their actions quickly and without equivocation.”

Rivers added, “Moving forward, my focus will be to ensure that no one ever has to go through what my mother, Cooper and I went through and I will work towards ensuring higher safety standards in out-patient surgical clinics. I want to express my personal gratitude to my legal team for their wise counsel and prompt resolution of this case.”

Also Read: Joan Rivers' Tiffany Dog Bowl Can Soon Be Yours at Auction

In January 2015, Melissa filed a lawsuit against Yorkville Endoscopy in New York, where Joan stopped breathing while undergoing a medical procedure.

The elder Rivers died in September 2014 after undergoing a throat procedure at the clinic. The medical examiner later determined that she had stopped breathing during the procedure and suffered fatal brain damage resulting from a lack of oxygen. She was 81.

Rivers’ attorneys, Jeffrey Bloom and Ben Rubinowitz of Gair, Gair, Conason, Steigman, Mackauf, Bloom & Rubinowitz, said that they are “pleased that the case has been resolved.

“While we know that no amount of money will compensate Melissa Rivers and her son Cooper for their loss, we are pleased that the case has been resolved,” they said. “We worked tirelessly to ensure that appropriate compensation was paid on behalf of those responsible for Joan Rivers‘ death.”

The attorneys added that they will work with the Rivers family to heighten safety standards in healthcare.

” In keeping with Melissa’s wishes, we will continue to work with the Rivers’ family to ensure that appropriate safeguards and higher safety standards are put into effect in all ambulatory surgery centers to protect the health, safety and well-being of all patients and to prevent such a tragedy from ever happening again,” they said. “We have agreed to keep the terms of the settlement confidential to make certain that the focus of this horrific incident remains on improved patient care and the legacy of Joan Rivers. “

Joan’s first major feud was dubbed the “Carson mess,” referring to her long-running battle with late "Tonight Show" host Johnny Carson. She was banned from the show for 26 years after launching a rival late-night program on Fox.
View In Gallery