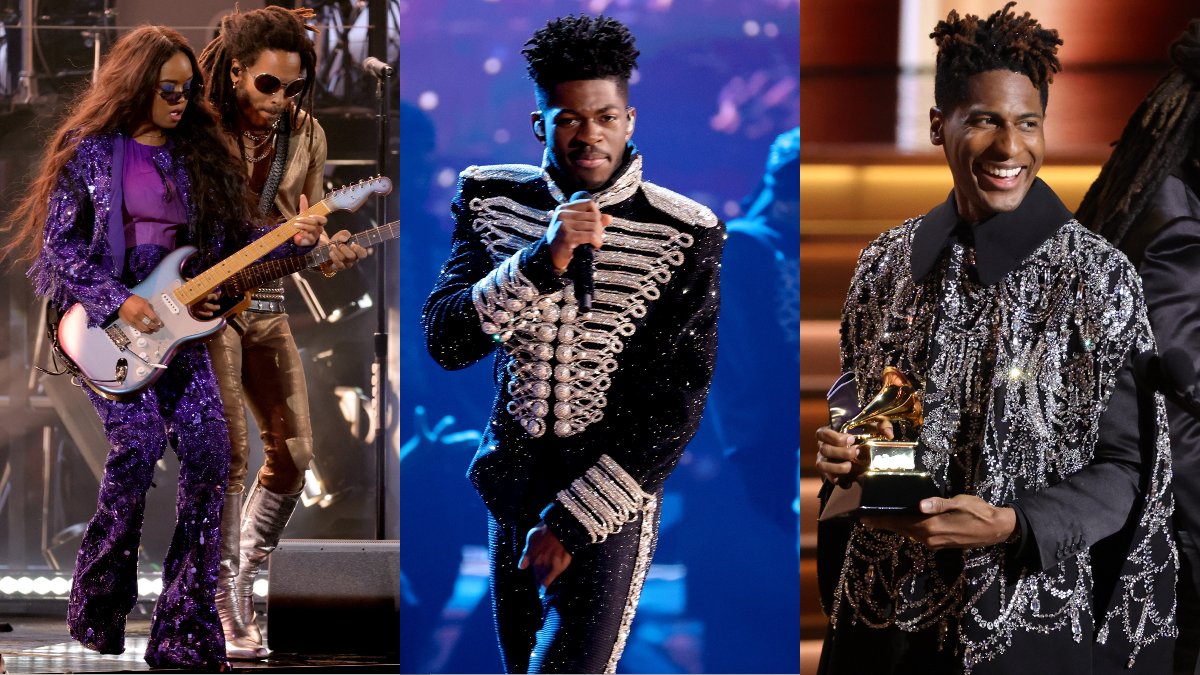 The 64th Grammy Award capped off an excellent year in music, from the debut albums of newcomers like Olivia Rodrigo and Saweetie to new material by respected artists like Tony Bennett and Dolly Parton.

Silk Sonic kicked off the show with a smooth rendition of “777” from their debut album -- and of course they picked up multiple awards for “Leave The Door Open.” Pop queens Olivia Rodrigo and Billie Eilish worked innovative set designs into renditions of their hit singles. BTS and Lil Nas X brought the house down with hyped-up dance numbers.

The Grammys gave a moving tribute to the war in Ukraine. In a pre-taped speech, President Volodymyr Zelenskyy made an impassioned plea for people to “tell the truth about this war.” John Legend was joined by Ukrainian singer Mika Newton and poet Lyuba Yakimchuk for a multilingual performance of “Flee.”

The show also paid respects to those the music community has lost in the past year. A montage devoted to the late Foo Fighters drummer Taylor Hawkins opened the “In Memoriam” segment. It was followed by a Stephen Sondheim medley performed by musical theater heavyweights Rachel Zegler, Cynthia Erivo, Ben Platt and Leslie Odom Jr.

Although most of the winners were rather predictable – with Silk Sonic, Rodrigo, and Foo Fighters nabbing multiple prizes – the night’s biggest surprise came at the very end when Jon Batiste won Album of the Year for “We Are.” He gave a humble speech thanking his fellow nominees and sharing his gratitude for music.

For all of that and more, read on for 8 of the most memorable moments at this year’s Grammy Awards. 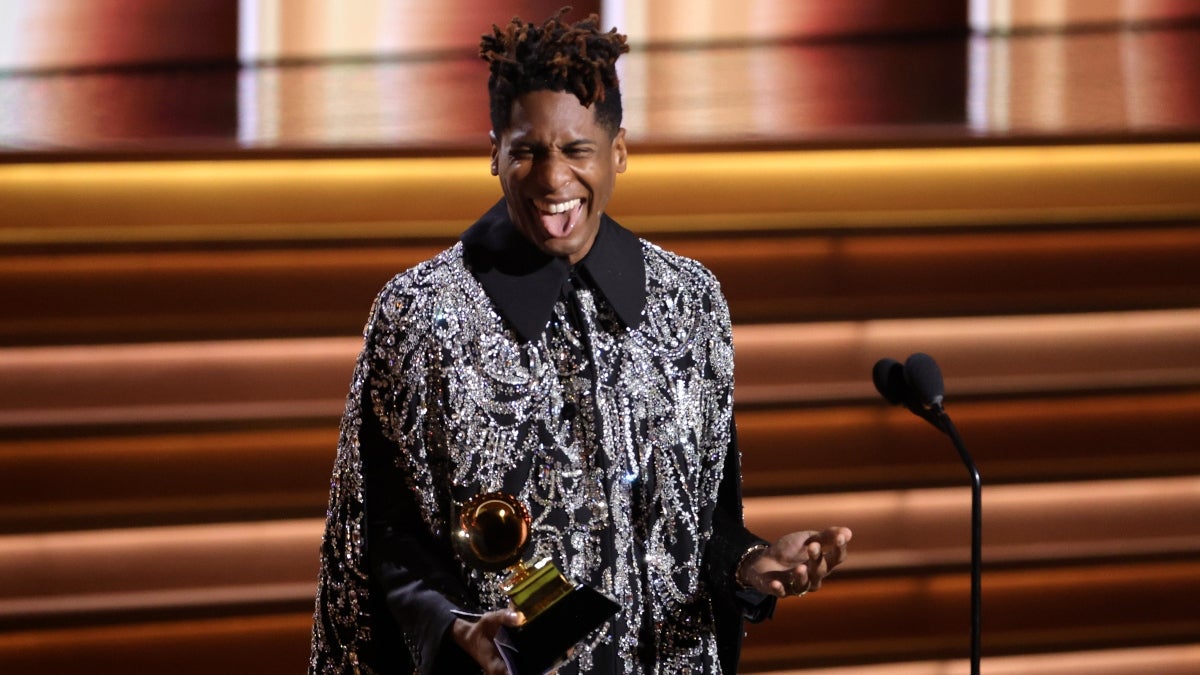 The last award given out ended up being the night's biggest surprise when Jon Batiste won Album of the Year for "We Are." He beat out a crowded field that included popular albums by Billie Eilish, Olivia Rodrigo, Taylor Swift, Kanye West and Justin Bieber. All in all, he scooped up 5 of his 11 nominations, becoming the first Black artist to win Album of the Year and only the second non-white artist (after Bruno Mars in 2018) to win the award since 2008. 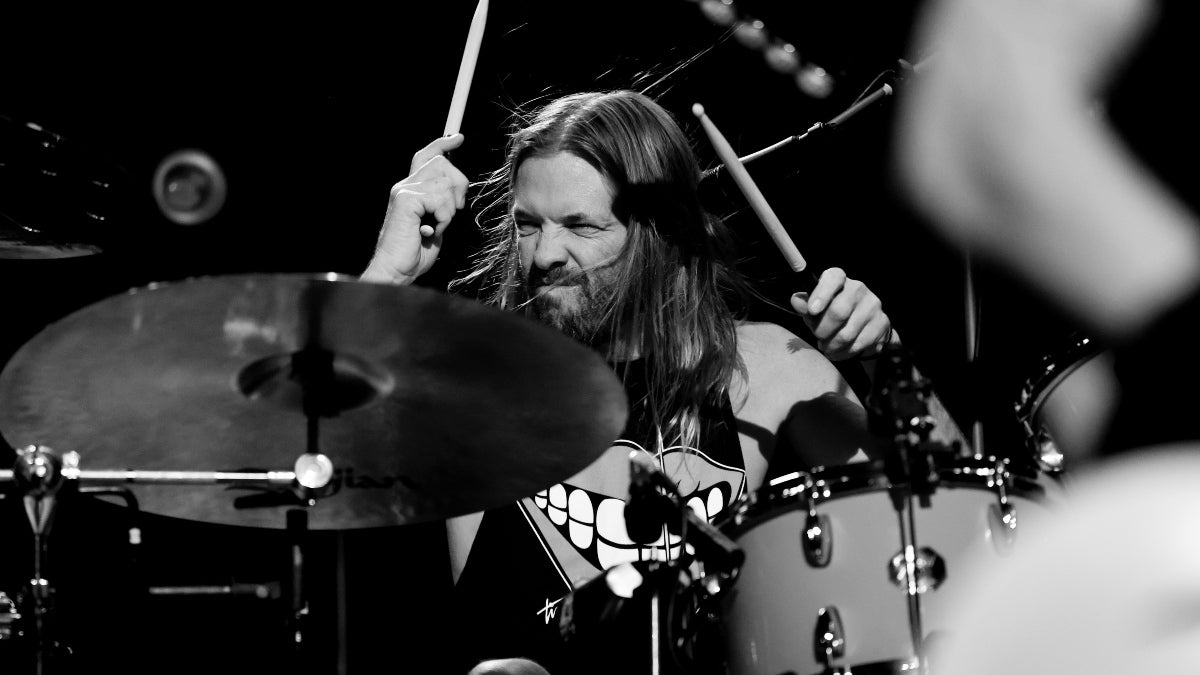 Foo Fighters Taylor Hawkins, who died a little over a week over, received a special video tribute set to the band's song "My Hero." The montage featured photos and footage of Hawkins over the years. "He's the best drummer in the world," frontman Dave Grohl can be heard saying. "We love him so much." 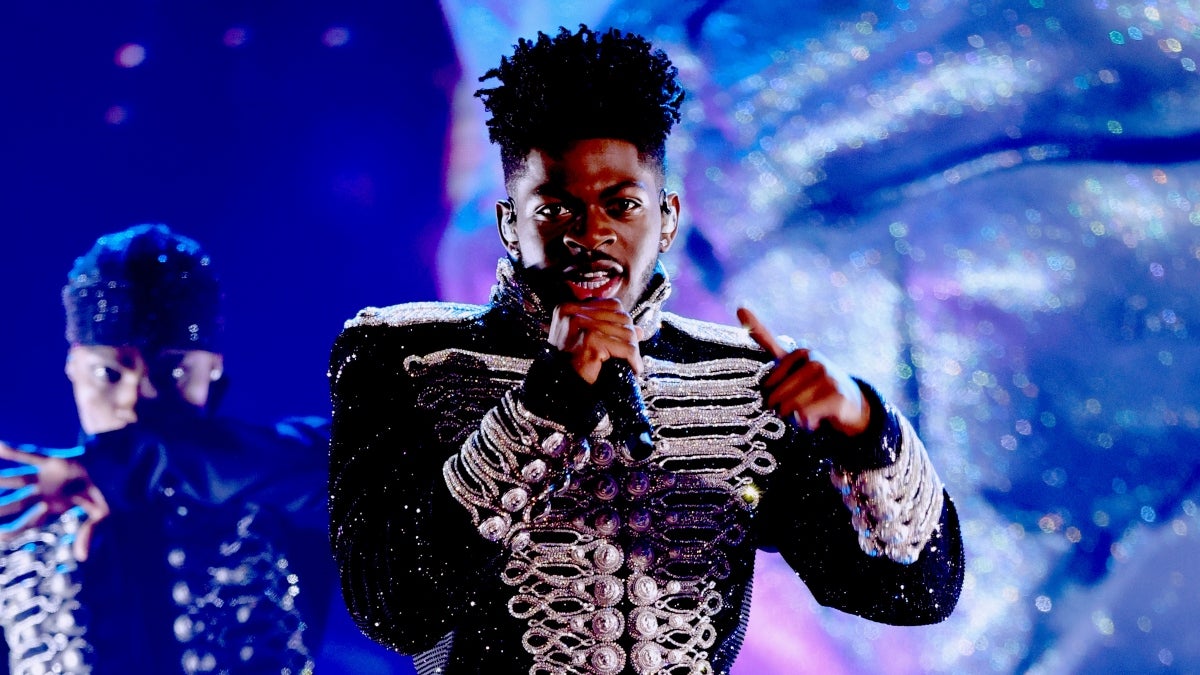 Lil Nas X brought the crowd to their feet with a rendition of his hit single "Industry Baby" alongside Jack Harlow. Between that, "Dead Right Now" and "Montero," Lil Nas X and a cadre of back-up dancers sped through outfit changes, from a floor-length cloak to a silver mesh top to a marching band uniform. A montage of his haters on Twitter and Fox News was the cherry on top. 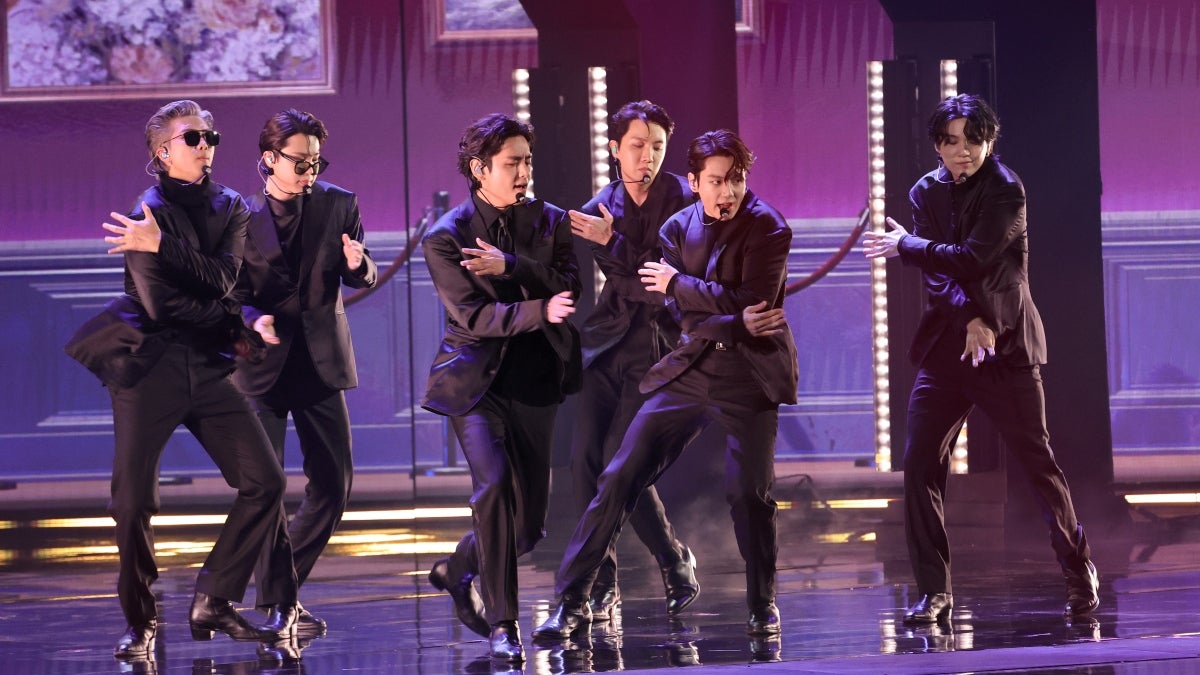 In terms of high-energy performances, nobody outdid BTS, who stole the show with their chart-topping single "Butter." The seven-member K-pop group wowed with their signature moves and style. There was even a flirty moment between V and Grammy-winner Olivia Rodrigo at the top of the number. 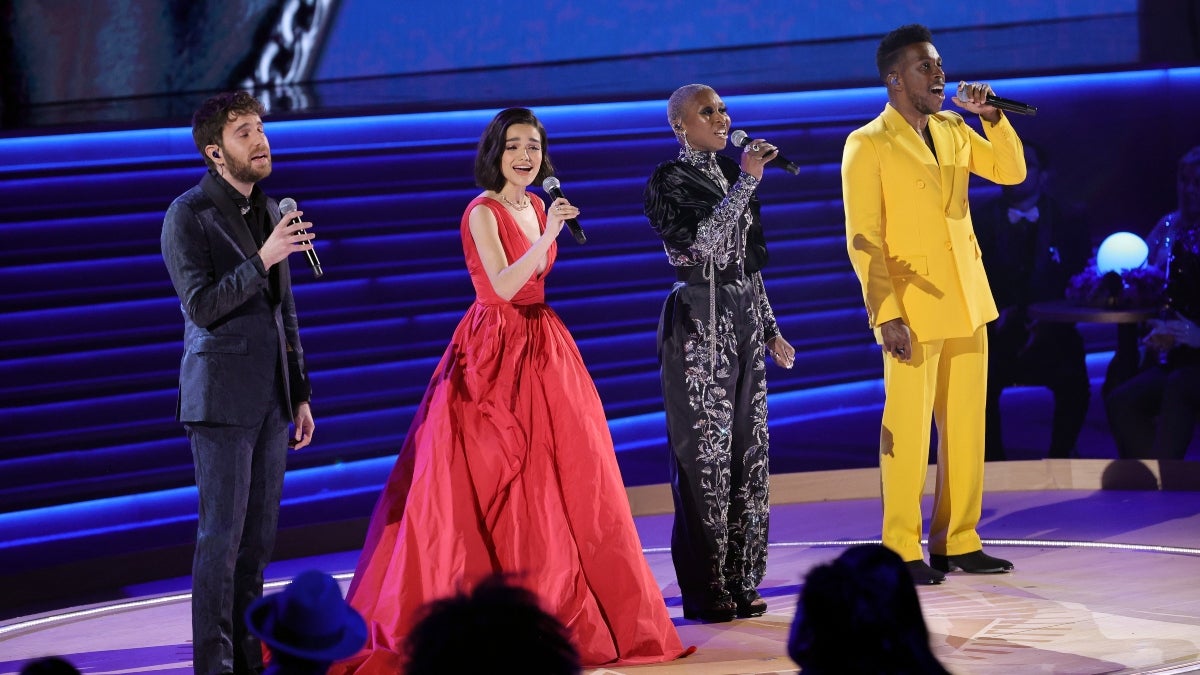 Some of musical theater's brightest stars came together to perform a Stephen Sondheim medley for the "In Memoriam" section. Ben Platt opened with "Not A Day Goes By" from the musical "Merrily We Roll Along"; Cynthia Erivo and Leslie Odom Jr. joined in with a duet of "Send In The Clowns" from "A Little Night Music." "West Side Story" star Rachel Zegler closed things out with the musical's final song "Somewhere." Fittingly, Sondheim was the last person to be honored in the slideshow. 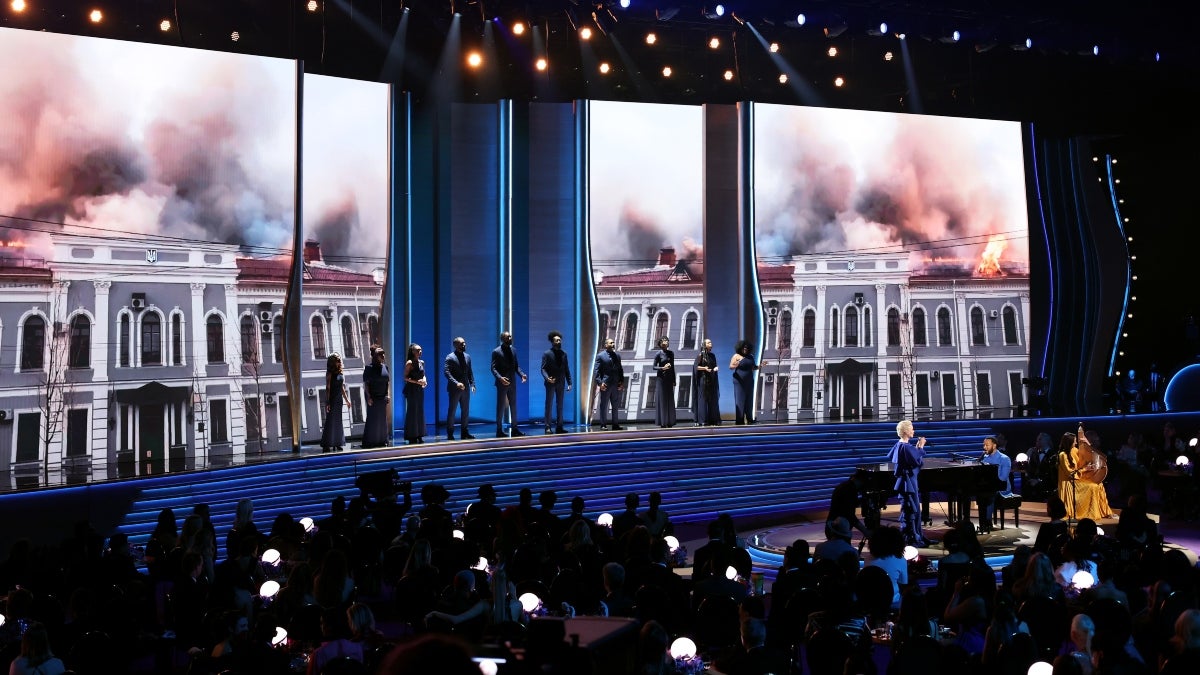 The Grammys memorialized the war in Ukraine with a stirring two-part tribute. President Volodymyr Zelenskyy gave a pre-taped speech imploring people to support Ukraine, saying: "Fill the silence with your music! Fill it today to tell our story." Afterwards, Ukrainian singer Mika Newton and poet Lyuba Yakimchuk joined John Legend for a performance of "Flee," accompanied by a montage of heartbreaking images of the war. 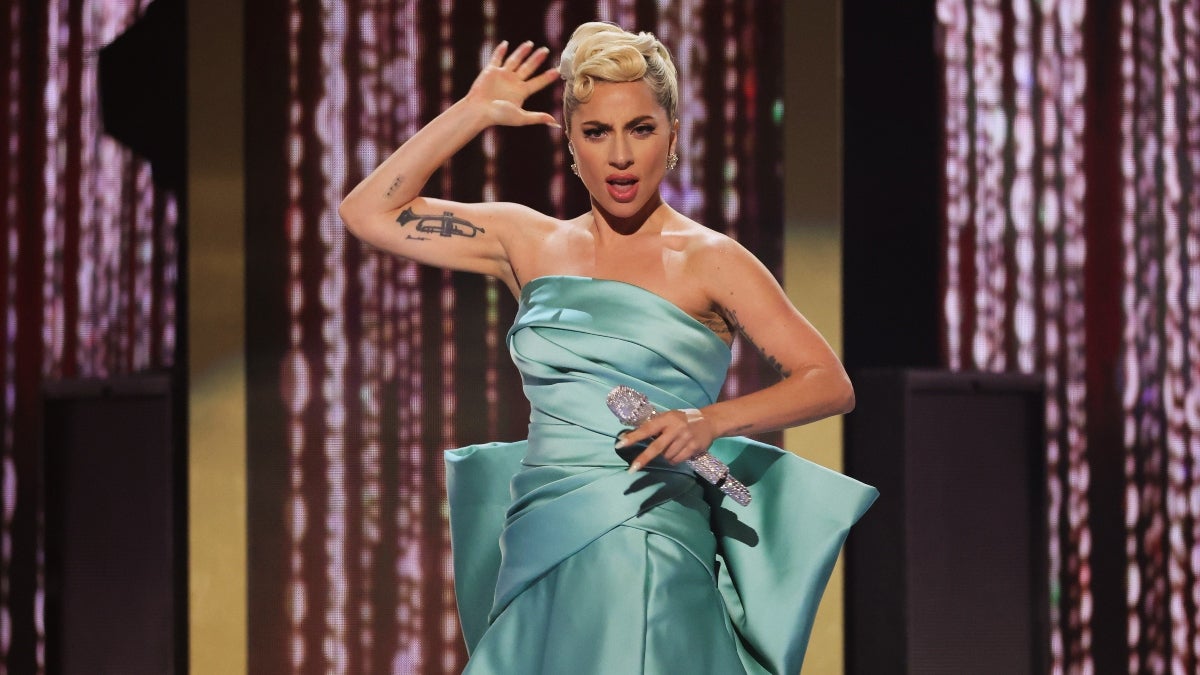 Lady Gaga jazzed up the Grammys with performances of "Love For Sale" and "Do I Love You" from her album "Love For Sale" with Tony Bennett. Though her duet partner was absent, his presence was felt throughout, from his pre-taped introduction to footage of Gaga and Bennett together in the studio. Toward the end, Gaga gave him a tearful shoutout: "I love you, Tony." 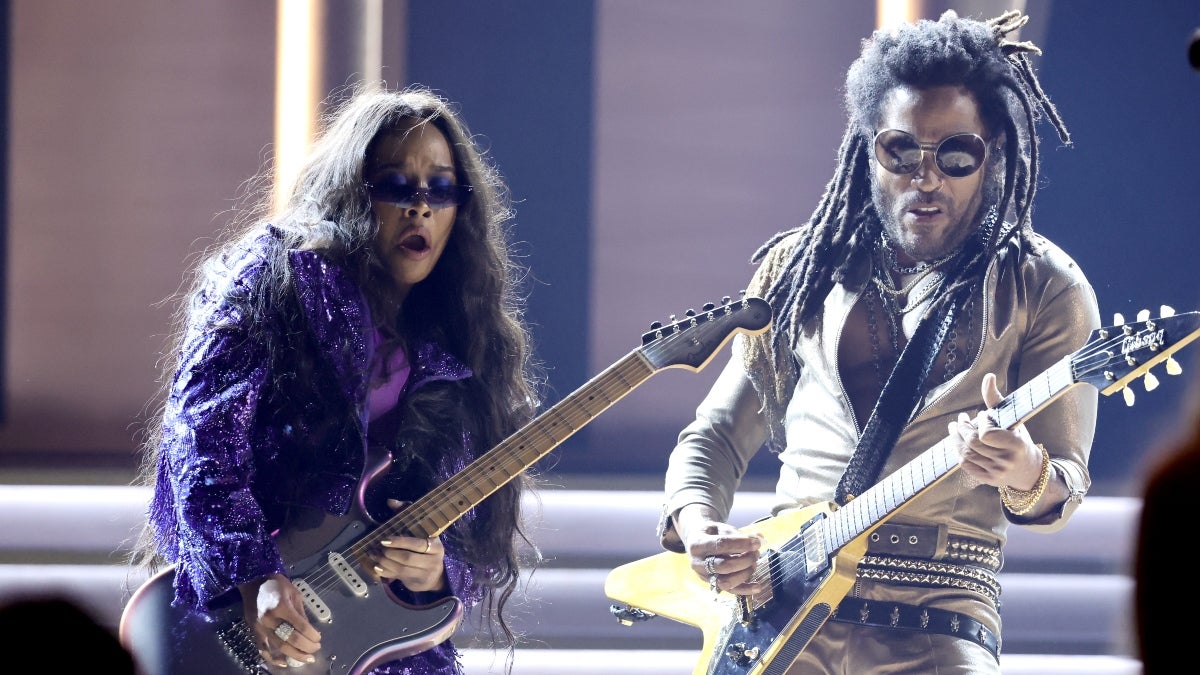 H.E.R. – is there anything she can't do? The multi-talented songstress rocked out with Lenny Kravitz, Travis Barker, Jimmy Jim and Terry Lewis to a medley of "Damage," "We Made It" and "Are You Gonna Go My Way." Nominated for eight awards at tonight's ceremony, H.E.R. showed off her impressive range by playing the guitar and banging out a drum solo.