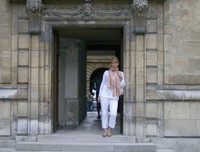 Where the heck have I been? A valid question, I grant you. I have been where the Internet lines are shaky and the sunshine-dappled cafes entirely more enticing than fighting a losing battle with technology. I’ve been in Paris, conducting interviews for "Stealing with the Pharaohs," and making sure the City of Light still merits its reputation. (It does, it does.) I’m equally glad to report that the Louvre finally coughed up its officials. I was able to interview Henri Loyrette, the director of the Louvre, about the question of looted antiquities and the role of museums in an age of restitution demands. I also met various other French characters, including the official in charge of those very restitution demands and acquisitions for all French museums, Anne Distel. And, most fun of all, an 85-year-old antiquities dealer whose son is the fourth generation of antiquity sellers — and the last. Roger Khawam is closing up shop and moving to New York. But not before his father spilled lots of juicy stories about how to get around the ban on antiquities exports. But you’ll have to wait for the book.