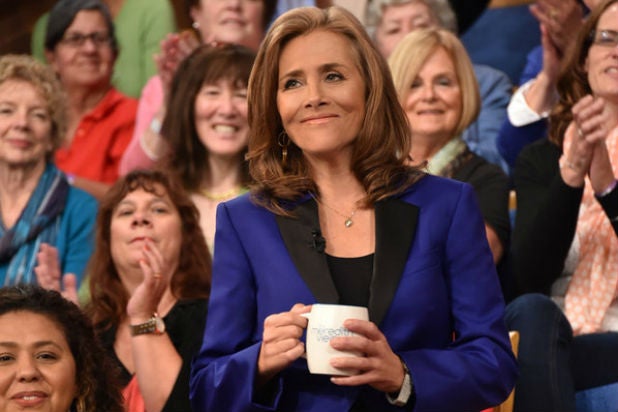 Meredith Vieira’s titular syndicated talk show is losing viewers, despite an ambitious attempt at a revamp.

Week 2 of last season (ending Sept. 21, 2014) dipped to a 1.2 rating with 1.449 million viewers, a decline of 12.1 percent at the time. That solid retention rate didn’t last for long. Hoping to jump start the NBCUniversal-produced show headed into Season 2, producers switched over to a live format. So far that hasn’t worked out.

“The Meredith Vieira Show’s” Season 2 premiere (the week ending Sept. 13, 2015) attracted 1.077 million viewers, with a 0.9 household rating. That overall audience number is down 34.7 percent from the debut week.

Her second week (ending Sept. 20) pulled the same rating, though with 1.048 million total viewers — a 27.7 percent decline from the comparable period last year.

Also Read: Meredith Vieira Sports Huge Black Eye on 'Today' Show: 'I Should Watch Out For Myself' (Video)

It is perhaps more fair to compare Vieira’s current numbers with her season average last year, which was 1.375 million. After all, there was far more hype to launch the brand new talker than there has been for its live return. Even so, both new episodes are down more than 20 percent from the Season 1 average.

That said, syndication muddies potential for apples-to-apples comparisons even further. It is important to note that Meredith’s station line-up and time periods were not the same in all cases this year versus last year, which could account for a big portion of the year over year decline.

The one bright spot: Vieira’s 97.3 percent retention rate for Week 1 to Week 2 under the new model.