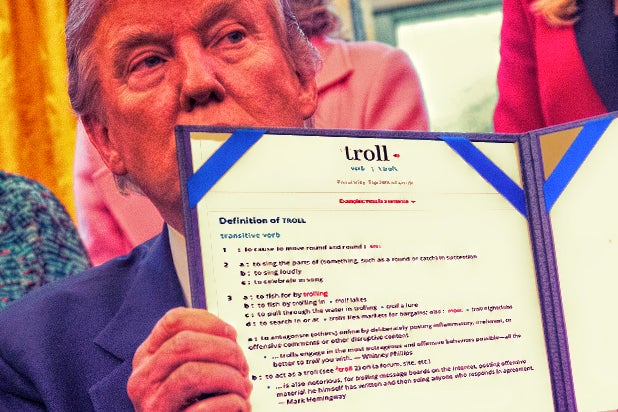 The team at Merriam-Webster is denying intentional trolling (verb, antagonize others online) of President Donald Trump, despite weeks of hilarious content and social media speculation to the contrary.

Subtle reminders about the meaning of fascism or other chaotic states of government, shading Kellyanne Conway over “alternative facts” and more have been coming from the dictionary’s official Twitter account.

Merriam-Webster chief digital officer and publisher, Lisa Schneider, chalks this up to a coincidence (noun, events that happen at the same time by accident but seem to have some connection), but also says that M-W social content often comes as a reflection of what users are searching. In other words, blame the algorithm (noun, a step-by-step procedure for solving a problem or accomplishing some end especially by a computer).

Also Read: Merriam-Webster Dictionary Schools Donald Trump on Use of the Word 'Braggadocious'

“It’s actually something we’ve been doing since 2010,” Schneider told TheWrap. “People look up a word and we’re giving them the definition. What meanings people lay on top of that is beyond our control.”

Even though the executive insists M-W is not trolling anyone, few are convinced. And with good reason.

After White House senior advisor Conway told NBC’s Chuck Todd that the Press Secretary used “alternative facts” in his first statement to the Press Corps, Merriam-Webster explained that a “fact is a piece of information presented as having objective reality.”

The dictionary took one more dig at Conway for good measure, firing off another tweet with an alternative definition for the word.

*whispers into the void* In contemporary use, fact is understood to refer to something with actual existence. https://t.co/gCKRZZm23c

Also Read: See What Beat Out 'Deplorable' and 'Bigly' for Merriam-Webster's Word of the Year

On Election Day, the dictionary featured the word “Götterdämmerung” on its background, which means the collapse (as of a society or regime) marked by catastrophic violence and disorder.

Three weeks after the election, the dictionary made sure everybody knew that “Fascism is still our #1 lookup.”

When Trump claimed China had stolen a U.S. drone in December, calling the act “unpresidented,” Merriam-Webster explained that the word was, well, unprecedented in the English language, tweeting “Huh” as its word of the day.

And after the White House left out the reference of Jews in its Holocaust Remembrance Day statement in January, the dictionary made clear that the Holocaust “is understood to refer especially to the Nazis’ mass murder of European Jews.”

Whatever the dictionary is doing (or not doing) seems to be working. In less than three years, the Merriam-Webster Twitter account went from 40,000 followers to a whopping 389,000 (did we mention this is an account for a dictionary??)

“It’s brilliant,” marketing expert and founder of the Brand Identity Center Chad Kawalec told TheWrap.  “This is a perfect example of a brand appropriately and authentically demonstrating their expertise in a highly relevant way. They can legitimately participate in the conversation because they are the authority on language and words.”

“We’re in the words business,” Schneider concluded. “People look to the dictionary to understand language. So if a public figure uses language in a remarkable way, then that’s fair game for us to discuss.”

The dictionary is sacred, and we’ll give them the benefit of the doubt. For what it’s worth, this is Merriam-Webster’s example-in-a-sentence entry for the noun “Trump”:

The trump of doom

????A fact is a piece of information presented as having objective reality. https://t.co/gCKRZZm23c

# of lookups = how we choose our Word of the Year.

There's still time to look something else up.

Good morning! The #WordOfTheDay is…not 'unpresidented'. We don't enter that word. That's a new one. https://t.co/BJ45AtMNu4

We're seeing a spike for both 'ombre' and 'hombre'. Not the same thing. https://t.co/O2o9C3gTja #debatenight

????'Holocaust' is trending again. It is understood to refer especially to the Nazis' mass murder of European Jews. https://t.co/SpAZ9kiKrn

If you're part of a group that's paid to applaud, you're a 'claqueur'. https://t.co/EX96vGLGDz