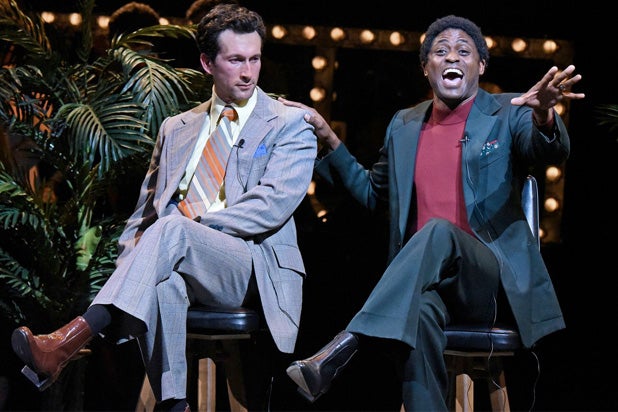 Kevin Parry for The Wallis

Stephen Sondheim’s 1981 musical “Merrily We Roll Along” has become as notorious — and beloved in some circles — as one of Shakespeare’s problem plays. The first Broadway production closed after just 16 performances, a high-profile flop that’s chronicled in the brilliant new documentary “Best Worst Thing That Ever Could Have Happened” by original cast member Lonny Price.

A new Los Angeles revival by young director Michael Arden, which had a delayed press opening on Saturday night at the Wallis Annenberg Center for the Performing Arts, is brilliantly sung by a talented cast of 20 led by Broadway veterans Aaron Lazar, Donna Vivino and Wayne Brady (who seems to have recovered from an outbreak of gout that forced him to skip the official opening night last Wednesday). But the show suffers from many of the same problems that have beset previous productions — as well as a few new ones unique to this staging.

Sondheim’s score is typically challenging and memorable — and standout tunes include “Not a Day Goes By” and “Old Friends” that have become standards in cabarets and revues despite the relative obscurity of the show. But the backwards structure of the narrative — chronicling three aspiring artists from the bitter dissolution of their friendship in 1976 to their wide-eyed mutual ambition on a Manhattan rooftop in 1967 — remains a challenge, as does the fact that the three leads are all 40-something performers who must play increasingly younger over the course of the show. (The original production took an opposite approach, casting actors in their early 20s who included future stars such as “Seinfeld” actor Jason Alexander and Tony winner Tonya Pinkins.)

Here, though, Arden — whose brilliant re-staging of “Spring Awakening” with Deaf West Theatre earned Tony nominations last season on Broadway — comes up with a clever conceit to bridge the gap. He introduces three young ensemble members who serve as shadow versions of the characters looking on and (in the moving final number, “Our Time”) taking over for their grown-up selves.

But elsewhere, Arden’s staging can seem clunky, and the non-singing book scenes (by George Furth) are too often played in an overly broad way, like a parody of bad daytime dramas. Lazar, as a rising-star composer named Frank, and Saycon Sengbloh, as the Broadway actress who lures him away from his first wife before being cast aside herself, are particular offenders in this regard.

Arden also clutters the stage with mirrors and tables that suggest dressing room areas and keeps cast members upstage and near the wings during scenes in which they’re not appearing. The latter is a nod to Hal Prince’s original staging, but it’s not a good one. When we see Lazar standing to the side waiting to make his entrance in an early scene set at a TV studio, we lose any sense of suspense of whether his perpetually late character will actually appear for the on-camera interview.

Brady, whose improvisational skills have earned him wide fame (and five Emmys), deploys his gifts to mixed effect. He makes his first-act solo “Franklin Shepard, Inc.” a show-stopper with his speed and use of sound effects — but later indulges in some goofy shtick with Frank’s son (Maximus Brandon Verso) and a giant suitcase that just feels out of place.

Vivino, who made her Broadway debut at age 8 as the original Young Cosette in “Les Miserables,” shines as Mary, the writer who perpetually and fruitlessly pines for Frank and later turns to alcohol and sarcasm with equal enthusiasm. Her clear, strong soprano stands out among a vocally talented cast. Similarly, Whitney Bashor (Broadway’s “The Bridges of Madison County”) brings a wistful presence to the role of Frank’s unfortunate first wife, Beth, and belts the heck out of her signature solo, “Not a Day Goes By.”

“Merrily We Roll Along” is unlikely to morph into a popular hit, but Sondheim’s sophisticated score makes it a show worth hearing and appreciating — even if it remains difficult to fully embrace.