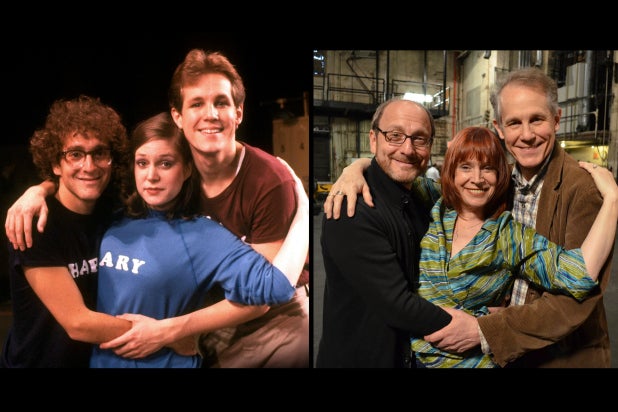 It’s a hard road in making a Broadway hit, and the path is just as bumpy when it turns out to be a flop. Few shows managed what Stephen Sondheim’s 1981 musical “Merrily We Roll Along” has, however: to swing from assumed smash to shock bomb, then to venerated, oft-performed classic.

Forever changed by that original run was its cast of young unknowns, one of whom, Lonny Price, has made a documentary about the show’s creation called “Best Worst Thing That Ever Could Have Happened” that should be catnip for Sondheim aficionados, musical theater geeks, and anyone who loves a how-did-you-get-there-from-here story. (That hyphenated descriptor was for all the “Merrily” fans; I’m one of you.)

Price, now primarily a stage director, is interested in more than just a run-of-the-mill making-of yarn, though. Since “Merrily” deals explicitly with youthful promise sanded down and re-shaped by age, experience, and the changing demands of friendship, Price makes his subject that very idealism — the kind that allows Broadway babies plucked from obscurity to feel the world is theirs, and what happens when it almost instantly goes away.

What allows Price to construct his thematically appropriate arc is an unearthed treasure trove of tryouts-and-rehearsals footage filmed for an abandoned network documentary and long thought lost. He threads this gold mine of footage through interviews he conducts with his fellow cast members as they are today: older, wiser, maybe not as successful as they’d envisioned (unless you’re Jason Alexander), but still capable of a twinkle-eyed grin at recalling an experience they wouldn’t have given up for the world.

“Merrily” was the sixth straight collaboration between critics’ darling Sondheim and storied director Hal Prince, following a string of Tony-winning, game-changing successes that included the intimate “Company,” the lush farce “A Little Night Music” and the sweeping Victorian murder melodrama “Sweeney Todd.” They could seemingly do no wrong. Drawn to a little-known George S. Kaufman/Moss Hart play that notoriously moved backwards in time, Sondheim and his “Company” collaborator George Furth built a musical that started with its trio of aspiring, tight-knit buds — lyricist Charlie (Price’s role), composer Frank, and author pal Mary — successful but estranged in their middle age, and ended with them young, full of beans and, we realize, poignantly naive.

It turns out the overly optimistic ones were the show’s creators, who couldn’t fix the show’s myriad problems, which started with the odd chronology, and deepened with having teenaged/twentysomething actors in over their heads playing jaded adults. You can even see, in fuzzy video filmed early in the run, the silhouettes of audience members getting up to leave. The lambasted show closed after only 16 performances, but the cast had a final say, turning in a last-hurrah album recording into one of the most spirited in Broadway history, ensuring extended life for “Merrily” and its witty, exuberant songcraft. The show contains some of the finest numbers about friendship, compromise, and dreams ever written.

Sondheim nerds, be forewarned: “Best Worst” isn’t granular about the master’s process. It doesn’t dig into every number’s origin story, or its creative intricacies — my favorite being how every “song” the Frank character writes cribs the same melody, Sondheim’s clever nod to how artists repeat themselves. There’s also nothing about how the original show was retooled and augmented for its post-Broadway incarnations, although we do see a tender, small reunion of the key cast at the Neil Simon Theater, during which Jim Walton (who played Frank) sings the added-later number “Growing Up.”

And while Sondheim and Prince are interviewed, their observations aren’t this documentary’s emotional focal point. They’re really just the fallen-idol context through which Price explores expectations and disillusionment among their pinching-themselves worshipper followers. “Best Worst Thing” is, at heart, about that once-in-a-lifetime feeling when a musical legend tells you he’s writing a song just for you, or comes to your modest house party to play it for you. But then it’s also about what it’s like when your heroes need to replace you in previews, you struggle for that next gig, and you face harder decisions later when, as sung in the musical’s pavement-pounding opus “Opening Doors,” “that faraway shore’s/farther every day.”

The wistfulness on display is touching and funny, often both at the same time. In a late scene, Price watches footage of his 22-year-old self, eagerly telling an ABC interviewer how his destination in life had been reached. It’s the kind of scene that could easily play as sentimentally indulgent, but since “Best Worst Thing” feels so personal about its director’s experience, it’s a moment that’s wholeheartedly earned.

Though “Merrily” examined an unraveling in reverse, Price’s heartfelt memory piece seems to make another set of Sondheim lyrics, from “Good Thing Going,” come gently to life all over again: “And if I wanted too much/Was that such/A mistake/At the time?”