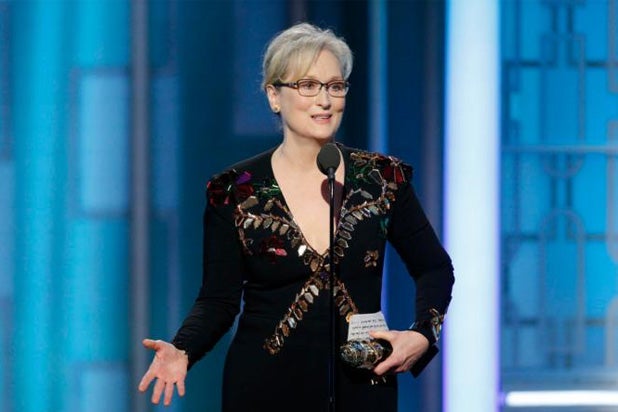 Meryl Streep, who President Donald Trump called “overrated” after she laid into him during her acceptance speech for the Cecil B. Demille Award at the Golden Globes, took more shots at the commander-in-chief in a Saturday night speech in New York, saying she’ll continue to stand up to his army of “brownshirts and bots.”

Accepting the National Ally for Equality Award from the Human Rights Campaign, the legendary actress talked about some of the blowback she received after her Golden Globes speech.

“It’s terrifying to put the target on your forehead, and it sets you up for all sorts of attacks and armies of brownshirts and bots and worse, and the only way you can do it is to feel you have to,” she said. “You have to. You don’t have an option. You have to.”

Streep didn’t specify what she was referring to with “brownshirts,” but the term historically refers to members of an early Nazi paramilitary force that intimidated targeted minorities.

Streep also addressed what some have called one of the more tone-deaf parts of her Golden Globes speech, when she mentioned the immigrants and foreigners in Hollywood and said that “if we kick ‘em all out, you’ll have nothing to watch but football and mixed martial arts, which are not the arts.”

“I am the most overrated, overdecorated and, currently, over-berated actress, who likes football, of my generation,” she said.

She also poked at the president’s insecurities later in the speech.

“If his catastrophic instinct to retaliate doesn’t lead us to nuclear winter, we will have much to thank this president for,” Streep said. “Because he will have woken us up to how fragile freedom really is.”