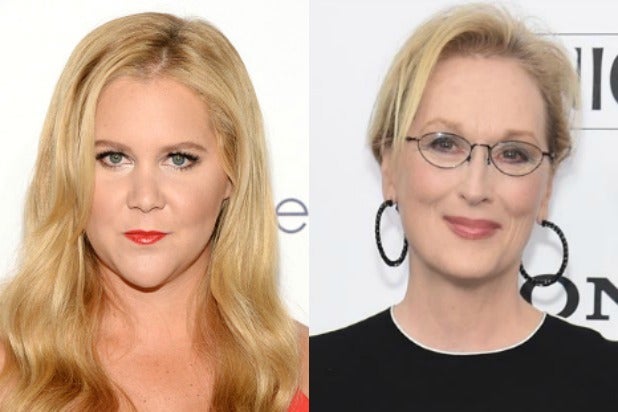 Many have called Meryl Streep the greatest actress of her generation. Now “the Great One” shines light on who she’d choose to play her in a biopic.

Also Read: Meryl Streep Explains Why She Wanted to Sing So Badly in 'Florence Foster Jenkins'

When Schumer got word of Streep’s compliment, she was understandably stunned. Her response: “Holy s—.”

HuffPo’s entertainment reporter Matthew Jacobs sat down with Streep for a quickie five-minute chat and got creative with questions the star, undoubtedly, had never been asked before. Like, which former co-star would be best at scaring off a bear while camping. Streep’s response: “Liam Neeson. Duh.”

“I’m not sure she was all that into it, but she is the greatest actress of our time, so it’s hard to know for sure,” Jacobs said of Streep. “I intended to keep it going for a bit longer, but by the time she started drawing blanks on which of her co-stars could best fake obscure talents, I had to move on.”

Streep plays a real-life society grand dame who sang with enormous enthusiasm but only the vaguest of acquaintances with things like pitch, timing and tone in “Florence Foster Jenkins,” which opened Friday to so-so reviews. The Stephen Frears-directed film also stars Hugh Grant and Simon Helberg, best known as the genius with a seriously bad sense of style on “The Big Bang Theory.”