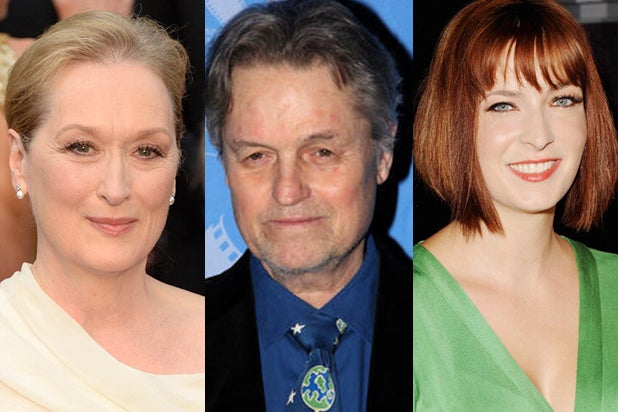 Hollywood is salivating over a red-hot package making the rounds that has Jonathan Demme attached to direct a Diablo Cody script, with none other than Meryl Streep attached to star, an individual familiar with the project told TheWrap.

Representatives for Demme and Cody did not immediately respond to requests for comment.

In “Ricky and the Flash,” Streep would play a woman who abandoned her family when she was younger to find fame and fortune as a rock star. Decades later, she decides to be a mother again to her estranged children, one of whom is going through a rough divorce.

Marc Platt, who worked with Demme on “Rachel Getting Married,” will produce, while Cody’s manager, Mason Novick, is also expected to be involved in a producing capacity. Novick produced the Cody-scripted films “Juno” and “Young Adult,” as well as Marc Webb’s directorial debut “(500) Days of Summer.”

The prestige package is being shopped to studios and high-level production companies with access to financing. Universal and Fox 2000 are among the studios that have expressed interest in the project, according to one insider.

Demme and Cody won Oscars for “The Silence of the Lambs” and “Juno,” respectively, while Streep has three Academy Awards on her mantle. Demme previously worked with the acclaimed actress on the “Manchurian Candidate” remake.

CAA reps Streep, while WME reps Demme and Cody, who are respectively managed by LBI Entertainment and MXN.