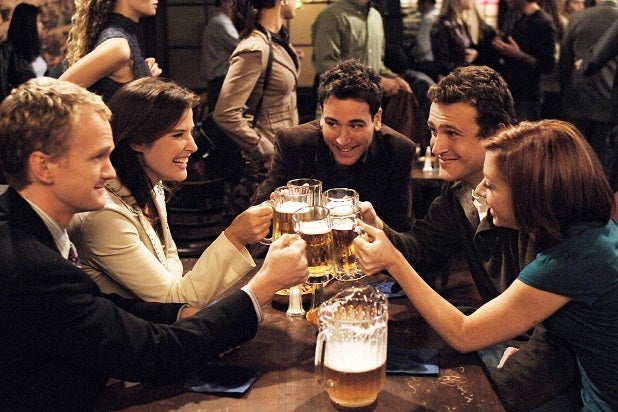 With “How I Met Your Mother” hurtling toward its series finale on Monday, TheWrap looks back at six particularly striking (in one case, literally) from the show’s history.

Yes, we know; the CBS sitcom has had tons of OMG moments throughout its nine-season run, but if you haven’t heard there’s a dangerous shortage of internet lately and we’re trying to conserve. Feel free to share your own favorite moments in the comments section.

1. Slapsgiving
Because what better way to celebrate a holiday of gratitude and togetherness than to wallop your smart-mouth buddy in the face? Just as the Pilgrims and Native Americans intended.

See photos: ‘How I Met Your Mother’ Finale: What the CBS Series Meant for Its Stars’ Careers

2. Robin Sparkles
Robin Scherbatsky, pop princess? It was revealed to be so during this very special moment when the gang discovered that Robin had spent at least part of the ’90s as Canadian singing sensation Robin Sparkles, an unholy combination of Tiffany, Debbie Gibson and other songbirds of the mall-tour era. Frankly, we like her current look better.

3. Marshall Goes Nude
Forget having nude pics of yourself leak onto the internet — “HIMYM” went old-school with the concept when a naked painting of Marshall found its way behind the bar at MacLaren’s for all to gawk at. He wasn’t amused, but the rest of us were.

See video: Lindsay Lohan Protests ‘How I Met Your Mother’ Finale by Hammering It Up

4. Marshall’s Father Dies
The emotional undercurrent of “How I Met Your Mother” swelled to tsunami-like proportions when Marshall is told that his father died after suffering a heart attack. In a brief minute, Marshall’s mood shifts from elation at Lily’s arrival to the heart-crushing realization that he’s lost his father. Sniff. It’s awfully dusty in here all of a sudden…

5. Say Hello to Mama (Finally!)
The show dragged this moment out to agonizing lengths for fans. Viewers finally got some payoff during the season eight finale of the show, when Cristin Milioti strolled into a train station as the titular maternal unit and ordered one ticket to Farhampton — and a life-changing sequence of events.

See video: ‘How I Met Your Mother’s’ Alyson Hannigan Will Never See Her Sitcom Co-Stars Again

6. Barney Drops Some Science
Leave it to Barney to lay out the rules of attraction with mathematical precision, explaining the fine lines of crazy and hot to the gang as if he were a clinician in a lab coat. This bit might not have been a particular hit with the feminist crowd, but you have to admire a man with a plan.