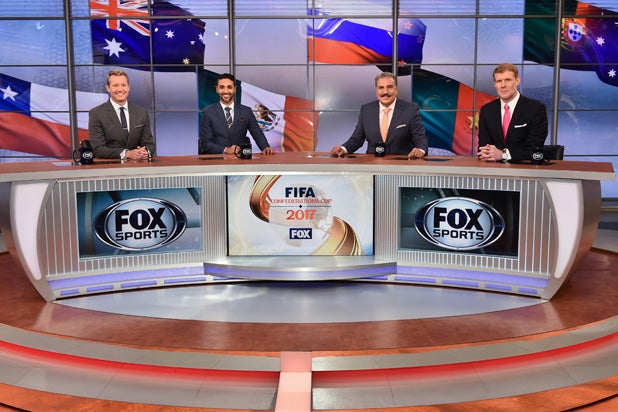 Mexican-Americans have been underestimated and undervalued by many, including by a certain U.S. president. But Fox Sports has a new term for the 35 million-strong community: target audience.

Fox Sports cable channels FS1 and FS2 are currently broadcasting the 2017 FIFA Confederations Cup, an eight-team tournament that is effectively a dress rehearsal for next summer’s World Cup. It’s even held in the same place: Russia. Fortunately for Fox, the vaunted “El Tri,” Mexico’s national soccer team, is doing well — and lifting ratings along the way.

“Mexico is really our second home team at Fox,” David Neal, Fox Sports’ vice president of production and FIFA World Cup executive producer, told TheWrap. “During this tournament, we’ve had [reporter] Francisco X. Rivera embedded with El Tri. Every day we want to do coverage of Mexico whether or not they’re playing.”

And Neal said that coverage isn’t oriented toward older, primarily Spanish-speaking fans, Neal said, but soccer-mad millennials who may not even speak the language but have family or cultural ties to the Mexican soccer team.

“We did a focus group during the lead-up to Confederations Cup,” Neal said. “One of the things that resonated pretty clearly was that younger generation viewers in the U.S. consider themselves language agnostic. They’ll go wherever they get the best coverage, the most information.”

That’s why Neal is hoping Mexico’s run of strong play continues — all the way to Sunday’s final.

“It’s the ideal scenario,” he said of Mexico appearing in the championship match, which will air live at 11 a.m. PT on FS1. To get there, Mexico has the formidable task of knocking off defending World Cup champion Germany on Thursday. (There’s also a third-place match that kicks off six hours earlier — not exactly ideal for the millions of El Tri fans living in the Western United States.)

But while hardcore soccer nuts will watch the tournament regardless of presentation and sleep schedules, Neal said Fox Sports has had to balance appealing to that core audience and finding ways to help more casual fans catch the international soccer bug, not just for the Confederations Cup but for next year’s main event: the World Cup — which Fox Sports is broadcasting for the first time.

To that end, Fox has brought on National Geographic Explorer Sergey Gordeev for pieces showing off Russian culture and scenery, and the network has already started cross-promoting the World Cup across its platforms. And Fox is broadcasting from studios in St. Petersburg and Los Angeles, with hosts including ex-U.S. national teamer Alexi Lalas, former El Tri stalwart Mariano Trujillo, German legend Lothar Matthäus and veteran coach Guus Hiddink — an international group, which Neal said was “by design.”

“The difference between success and a bona fide hit is bringing in the casual fans,” Neal said.

The Confederations Cup has also given Fox another tool to promote its sports streaming app, Fox Sports Go. With weekday matches mainly airing during work hours in the U.S., fans wanting to surreptitiously keep up with stars like Portugal’s Cristiano Ronaldo from their smartphone screens have taken advantage of the service.

“The amount of traffic and interest [the tournament has] driven in Fox Sports Go has been noticeable,” Neal said.

While Mexico’s strong play has been a boon for Fox Sports this month, the network is counting on the U.S. national team to drive interest from casual fans ahead of the World Cup. Fortunately, U.S.’ recent run of good form has made it more likely that they will make it to the main event — but Neal isn’t celebrating yet.

“I won’t rest easy until we’re officially qualified,” he said.