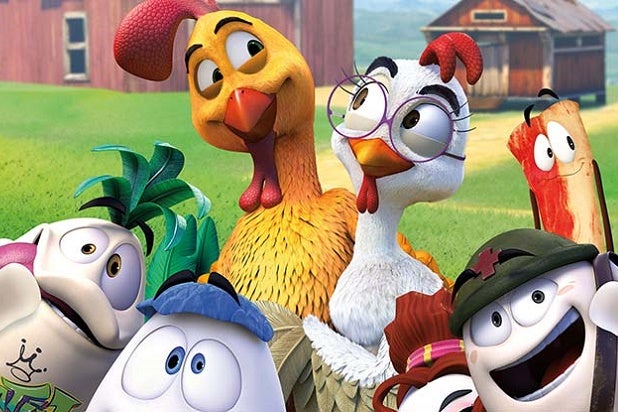 The computer-animated Mexican movie “Un Gallo Con Muchos Huevos” — in English, The Rooster With Many Eggs — translated very well at the box office this weekend for Lionsgate’s Pantelion Films.

In just 395 theaters, “Un Gallo Con Muchos Huevos” will take in an estimated $4.2 million over the four-day Labor Day holiday, good enough to crack the top 10 in seventh place. Despite screening in Spanish with subtitles and without a significant English-language ad campaign, the film posted the best per-screen average of any movie in release at $11,140

. It also received an “A+” CinemaScore and is the second-best opening ever by a Pantelion film, trailing only “Instructions Not Included.”

“Un Gallo Con Muchos Huevos” is a hit in Mexico, where it is has topped the box office for the past two weekends and is that country’s top-grossing homegrown film of the year. That, and the fact that it was financed by its Mexican partner Grupo Televisa, was enough to convince Pantelion Chief Executive Paul Presburger that the film would work in the U.S., especially with the Mexican-American niche his company targets.

“When you can be culturally relevant to a demo, I think there is an audience for this kind of film here,” he told TheWrap.

“That is what Pantelion’s mission is,” he said. “We don’t compete with action, superhero or even horror pictures. But when we do comedy and family together — and most Latinos go to the movies as a family — we can do very well.”

It’s the third year in a row that Pantelion has successfully opened a film targeting Latino family audiences on this weekend with “Instructions Not Included” two years ago and “Cantinflas” last summer. It was produced by Mexico’s Huevocartoon Produccione for a very modest $6 million, so it will be a moneymaker for all involved.

Animated films have to connect with parents if they are to break out at the box office, and this one did with enough adult and risque humor –starting with its title –to earn a PG-13 rating.

“Like most animated films, this one has a lot of double entendres,” said Presburger, who said its “very Mexican” humor had a lot to do with its success.

“El Gallo” is actually the third film in a series, and though this is the first film to be released in the U.S., audiences were familiar with the series.

“The first two films were heavily pirated, so most families we targeted were aware of it or had seen the first two, so we were able to leverage the brand,” said Presburger. Not surprisingly, the new film performed best in California, Texas and Chicago, regions with significant Hispanic populations.

Also Read: Forget Fanboys, Why Hispanics Are the Most Important Moviegoers

Pantelion promoted the film, written and directed by Gabriel Riva Palacio Alatriste, with a grassroots campaign and virtually no mainstream English-language advertising.

“We did some Nickelodeon TV, but it was minimal,” said Presburger. “It’s very hard to specifically target Latinos with a general media spend, so went went back to the playbook.” There were “El Gallo” ads in supermarkets — the eggs section, of course — and on paper menus at restaurants in Latino communities.

The audience for “El Gallo” was split evenly between male and female and those over and under 25 years of age. The “A+” CinemaScore grade they gave the movie was even better than the critics, who have it at 70 percent positive on Rotten Tomatoes.

Pantelion will drill deeper into that audience, rather than seek to expand into the mainstream in the coming weeks, especially since Sony’s animated “Hotel Transylvania 2” opens later this month.

“We probably will have an English version for the DVD and video on demand,” said Presburger, “but animation translates very well.”

After this weekend, at least for this film, there’s no denying that.

In TheWrap’s series Hispanics at the Movies, we examine Hollywood’s abysmal record of casting non-Hispanic actors in Hispanic roles. Here’s just a sampling: