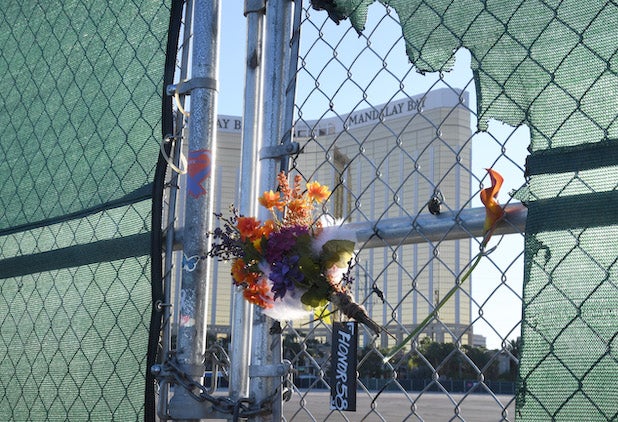 A memorial for victims of the Las Vegas shooting hangs on a fence across from the Mandalay Bay resort. (Ethan Miller / Getty Images)

MGM International Resorts has reached a settlement with the survivors and victims of the 2017 Las Vegas shooting, according to an announcement from the victims’ lawyers.

Though the exact payout will depend on the final number of victims who choose to join the settlement, the total amount is expected to fall within the range of $735 million and $800 million, according to the announcement. The settlement comes two years after gunman Stephen Paddock killed 58 people and wounded hundreds more attending the Route 91 Harvest music festival from his room at MGM’s Mandalay Bay resort in Las Vegas. Lawyers representing the survivors and victims said they wanted to hold MGM liable for damages because Paddock had been able to enter the resort — over the course of several days — with at least 21 suitcases containing weapons and ammunition before making his way to the 32nd floor and firing over a thousand rounds of ammunition.

The court will appoint an independent claims administrator to determine how funds are distributed among the survivors and victims in the settlement. The process is expected to be completed by next year, according to the announcement.

“Today’s agreement marks a milestone in the recovery process for the victims of the horrifying events of 1 October,” Robert Eglet, the lead counsel representing over 2,500 people impacted by the shooting, said in a statement. “While nothing will be able to bring back the lives lost or undo the horrors so many suffered on that day, this settlement will provide fair compensation for thousands of victims and their families.”

With the settlement agreement, both parties will also agree to drop any pending litigation. MGM, which countersued the victims last year, is also not admitting to any liability with the settlement.

“Our goal has always been to resolve these matters so our community and the victims and their families can move forward in the healing process,” MGM Resorts CEO and Chairman Jim Murren said in a statement. “We have always believed that prolonged litigation around these matters is in no one’s best interest. It is our sincere hope that this agreement means that scenario will be avoided.”