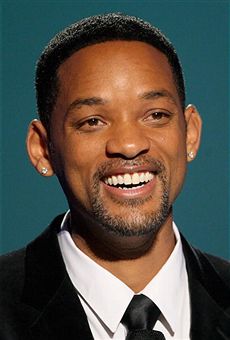 Is Will Smith setting sail for outer space again, or will he settle for London by way of Manhattan?

Variety reports that Smith is considering two projects for his next outing, though neither one sounds especially promising.

Sony and its accountants really want Smith to star in "Men in Black III," which sounds like a bad idea if there ever was one, despite having Etan Cohen ("Tropic Thunder") writing the script. I liked the 1997 original as much as any 13 year-old kid, but the 2002 sequel was pretty rancid, even with Rosario Dawson joining the cast. I maintain that Vincent D’Onofrio’s alien, Edgar, is still the best thing about those movies.

Sacha Baron Cohen and Jemaine Clement have been linked to roles in the sequel, while Josh Brolin has been mentioned to replace Tommy Lee Jones, who is unlikely to return. The "Men in Black" franchise has grossed over $1 billion worldwide, and the studio would love to keep milking that cash cow.

The other project hoping to land Smith is Fox’s fantasy-adventure "The City That Sailed," which Smith’s production company Overbrook has been developing for some time from a script by the brilliant Andrew Niccol ("Gattaca," "The Truman Show"). Francis Lawrence was one attached to direct but he’s since moved on to "Water for Elephants," and there is currently no director on the project. Expect one to be announced shortly, regardless of whether or not Smith decides to star.

"City That Sailed" follows a New York street magician who is unhappily separated from his young daughter, who lives in London. While exploring a lighthouse one day, the girl finds some magic candles and wishes to be closer to her father, causing the island of Manhattan to break away and drift across the Atlantic Ocean toward England. It sounds a little like "Bedtime Stories," another disappointing, VFX-laden family film centered around a big star and some unlikely magic, though to be fair, I am not the target audience for "City That Sailed."

If the project does move forward with Smith, I’ll go out on a limb and predict he’ll wind up casting his daughter and "I Am Legend" co-star Willow as the little girl, just as he cast son Jaden in "The Pursuit of Happyness" and Sony’s upcoming remake of "The Karate Kid." It’s a trend that seems to be in vogue right now, with John Travolta, Kelly Preston and their daughter Ella Bleu making a family affair out of "Old Dogs." And not to keep ragging on celebrity Scientologists, but if you don’t think Suri Cruise is starring in a movie in the next 3-5 years, you’re crazier than her old man. (For the record, I love Tom Cruise and don’t think he’s ever given a bad performance.)

I understand that actors work looong hours while filming a movie, making it hard for them to see their families, so I understand the inclination to cast their kids so they can spend more time with them, but for some reason it rubs me the wrong way when it’s an actor’s kids, as opposed to a director’s, like Judd Apatow and Robert Rodriguez. Keep in mind that neither Smith is attached to "City that Sailed" at this point.

Smith hasn’t been seen onscreen since the Sony drama "Seven Pounds" (which I happened to like) sank at the box office in 2008. He recently announced he’s producing a remake of "Overboard" starring Jennifer Lopez.

Neither Fox nor Sony would comment to Variety about their report, but insiders assured the trade paper that one of the two projects will be Smith’s next movie.

I’m holding out hope that Smith will rev up development on the long-rumored "Uptown Saturday Night" remake that would pair him with Denzel Washington, but even if that one is considered a long shot, there’s always "Bad Boys 3" lurking around the corner.